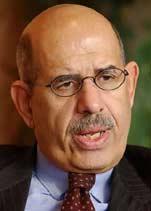 Mohamed Elbaradei has won the Nobel Peace Prize, along with the International Atomic Energy Agency which he heads – that isn’t a bad result at all, far better than the nomination of Bob Geldof and Bono. Greenpeace expressed reservations, because the IAEA is committed to the continual peaceful use of nuclear power – good!

Greenpeace more than any other international organisation has been responsible for scaremongering a generation about nuclear power – when it is safely used in many countries around the world (outside the former Soviet bloc where it was used with little regard for safety).

Elbaradei has focused efforts on Iran and previously Iraq (and before it withdrew from the Nuclear Non Proliferation Treaty, North Korea) not acquiring nuclear weapons – and has performed his job with some dignity. There is little doubt that preventing other countries from acquiring nuclear weapons contributes to peace between countries. There are reports the IAEA wants to pursue Israel – which it can’t as it is not a signatory to the Nuclear Non Proliferation Treaty – nor should it be! He also deserves it far more than past winners Jimmy Carter and Kofi Annan – it is hard to forgive Carter for taking the eye off the ball in the Cold War, and Kofi Annan has not been extraordinary as Security General of the UN.
Posted by Libertyscott at 1:44 pm