Morales makes sense on one point 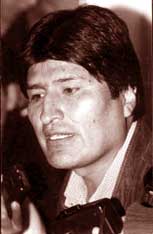 .
New Bolivian President Evo Morales sides with Castro and Venezuelan socialist strongman Hugo Chavez, and is rabidly anti-capitalist, but he has made sense on one point. Legalising the international sale of Coca.
.
He said to The Guardian: .

“You have to realise that, for us, the coca leaf is not cocaine and as such growing coca is not narco-trafficking," he says. "Neither is chewing coca nor making products from it that are separate from narcotics. The coca leaf has had an important role to play in our culture for thousands of years. It is used in many rituals. If, for example, you want to ask someone to marry you, you carry a coca leaf to them. It plays an important role in many aspects of life."
.
"I want to industrialise the production of coca and we will be asking the United Nations to remove coca leaf as a banned substance for export," he says. "That way, we can create markets in legal products such as tea, medicines and herbal treatments. There has even been research in Germany which shows that toothpaste made from coca is good for the teeth.

Coca-colgate? Maybe Coca Cola should have kept some in it for dental hygiene? Seriously though, this should be supported. I don't like Morales cuddling up to socialist dictators and his anti-capitalism, and I don't agree with them that cocaine should remain illegal, but it would be a good step forward to give Bolivia this carrot.

If the US legalised coca products, it would improve relations with Bolivia and help to nullify the new Latin American socialist alliance developing between Bolivia, Venezuela and Cuba.
.
Sadly, I doubt if it will. The US commitment to the war on drugs is only matched by the degree to which it has failed to stem the demand and supply.

Posted by Libertyscott at 1:22 pm