Sue out to spend your money again 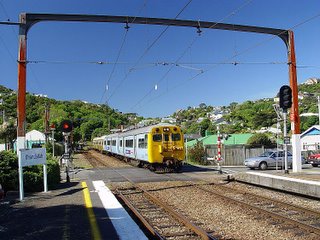 .
Sue Kedgley is the mistress of hyperbole claiming demanding that other people’s money be used to pay for an exhorbitant upgrade of the Johnsonville rail line because :
.
“it is clear there is a need to transform the Johnsonville line from a run-down, dilapidated suburban rail service into a modern rapid transit system, preferably using light rail.”
.
No it isn’t Sue, keep your knickers on, the Northern Wellington Public Transport study isn’t over yet! Why is light rail preferable, because it costs even more and the units can’t run on other lines in the region? You’re just making it all up following a Green fetish that light rail is inherently “good”. $3-4 million is the cost of one average light rail vehicle, so we are talking about $40 or so million!! A new bus is around $250,000. Don’t forget light rail needs new platforms as well and is not compatible with heavy rail services.
.
The money you’re already committing from rates and petrol tax to upgrading the existing trains is nothing to the Greens:
.
“At present a mere $5.4 million has been allocated to refurbishing 50-year-old carriages on the Johnsonville line. What this survey shows is that we need to invest in new train carriages, not just patching up old stock, and increasing the frequency of services during the morning peak.”
.
Well Sue, the reason that the current trains are being refurbished is to provide three to five years of service until either new trains or replacement buses can be introduced. If it didn’t happen, the trains would literally stop running. What is this “we need to invest”? Invest? In a line that costs millions of dollars a year in subsidies? Ever been on these trains outside the morning peak Sue? No, of course not, you drive most places. I took one a couple of years ago at 5pm from Johnsonville and there were 3 people on it and nobody was standing on the evening peak one. You don’t invest in something that loses money. That is why no government has done anything other than refurbish the current lot of trains, this is their third refurbishment.
.
"In the 21st century, standards for rail have improved and people expect modern, accessible, reliable trains, not ancient carriages and unreliable services,"
.
Yes and we’d all like new things. However Sue, unfortunately people using the line are unwilling to pay for new trains – you see you’d have to double the fares to even start to break even, and a lot of people wouldn’t want to do that.
.
Don’t give me nonsense about they would all use cars if the trains were not there either – most would use the buses, especially if you had bus lanes from Kaiwharawhara through Thorndon and in Ngauranga Gorge. The Johnsonville line is quaint and scenic, but unless you can dramatically increase patronage and pump up the fares, it isn’t a goer.
.
If it were me, I’d let the study run its course and accept its recommendations, which, in the absence of politics, are probably to close the line when the trains are unserviceable and replace with commercially viable buses following a similar route (and express buses down Ngauranga Gorge). It is cheaper to put in bus lanes in Ngauranga Gorge than to convert the Johnsonville line to light rail.
.
However, I have a pretty good idea what WILL happen. Whatever the result of the study, the line will remain open, paid for by your taxes and rates. The region will be getting brand new electric units to replace the old ones within five years, but they will NOT run on the Johnsonville line. Instead, the floors of the tunnels of the line will be lowered, and the passing loops extending (for around $12 million) and the existing, not so old, Ganz Mavag units, running on others line, will operate on the line as well. It’s not what Sue wants, but should keep the pundits happy – all with a bit more of your money, for at least 10 years until those trains need a major refurbishment!
.
Half the time the Greens just want to piss your money up a tree!
Posted by Libertyscott at 12:23 pm