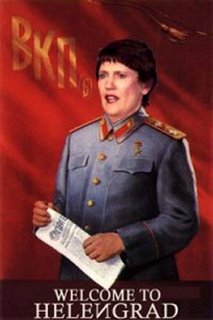 .
People's Government Free of Corruption
.
(Helengrad, 17 March 2006) The Clarkistan Acting Deputy Commissar of Police (People's Civilian Securitat) today said that the complaints made against the Worker's Party of Aotearoa (Labour) made by the Electoral Commission were groundless in their accusations of breaches of section 214B of the Electoral Act 1993.
.
"The electoral pledge cards circulated by the Popular Democratic Government of Clarkistan, which happened to include the name of the Worker's Party of Aotearoa and its distinguished Great Leader Comrade Hel En Clark, could not be an "election activity", as they merely described what the Popular Democratic Government would do, if - the people in their democratically expressed general will - elected it by their free choice. " said the Commissar.
.
The Acting Deputy Commissar clarified that far from encouraging people to vote for the Worker's Party - the pledge cards represented mere promises of what would happen if the people gave a ringing endorsement, they were not "advertising" the Worker's Party or any other such absurdities. "Such criticisms were at best the utterings of a deluded fool, at worst treasonous counter-revolutionary statements indicating loyalties to the child murdering Bush and Blair imperialist aggressors" he continued "A pledge card is an affirmation of the people's love for the party and its leader, represented through the people's government, by popular acclaim, listing the forthcoming Three Year Plan as is the tradition every three years at this time. No working person cares to return to the heartlessness of an era when the government was not of the people, and the people would not endorse the release of the unplanned three years of oppression that the National Party pro-American fascist puppet clique wished to impose on the working classes. The pledge card comes from the heart of the people's love for the warm maternal bosom of the Great Leader and the loving instructions she gives us from Helengrad."
.
Spontaneous demonstrations of support were observed by Clarkistanis in Helengrad, Auckland, Clarkchurch and DuneCullen, as trade unions, students and workers carried placards saying "We love Comrade Clark", "Down with the US funded National Party Imperialists", "Deport the counter-revolutionary Chief Electoral Officer" and "Clarkistan will always be for the people". TV and radio reports all had broadcasts demonstrating the confidence the people had in the righteousness of the People's Civilian Securitat's correct line.
.
"Continued debate about this is as futile as barking at the moon" said the Acting Deputy Chief Commissariat of the People's Civilian Securitat.
.
Of course, the Great Leader and her comrades such as the Dear Manager of the People's Treasury Great Dr Cullen were elected with an overwhelming mandate by the working classes, therefore any argument as to the democratic will of the people being thwarted was "sheer nonsense" declared the head of the People's Civilian Securitat.
.
He also explained how the continued support of the Worker's Party by the Party of United Future (headed by his Holiness the Beloved Representative of Ohariu-Belmont Minister of People's Revenue Comrade Dunne) and the Party of Clarkistan First (headed by the distinguished extraordinary and plenipotentiary Minister of Foreign Affairs and Chief Custodian of the People's Baubles the Honourable Comrade Winston Peters) demostrated the broad democratic mandate for government. "If it were not for Comrades Dunne and Peters, we could not claim our mandate to govern - their continued support is proof of the veracity of our case that the people choose to pay for the election of the government they choose. Comrade Jim 'Ol Son' Anderton also gives his single Progressive voice to the People's Government- understanding that the people, the party and the government are one - and the people's government, cannot BY DEFINITION steal from the people, for it is made of the people, by the people, for the people".
.
Only reckless revisionist ultra-leftists like the Green Party, counter-revolutionary capitalist roaders like the National Party and the heartless US imperialist war-mongering ACT Party could claim anything different. Their kind were dealt a harsh blow at the elections, raising questions as to whether the people could even tolerate their continued presence at elections. It is only through the generous benevolence of the Great Leader than action is not to be taken against the other parties for their breaches of the law "The state is sovereign" reminded Comrade Clark "and my generosity knows no bounds, so I grant them clemency in the face of their certain guilt. Nobody can accuse me of being anti-democratic"
.
"However" Comrade Clark in her profligate magnanimity "despite the calls from so many working people, including trade unions, student representatives and correct thinking local authorities, I will not abolition general elections as of yet. They provide me and my Popular Government recurring ringing endorsements of our correct path, humiliate the counter-revolutionary forces of the left and right, and provide an opportunity for me, with help from the people's own contributions through collective revenue enhancement (tax) to declare my Three Year Plan to thwart the forces of revisionist, fascist, ultra-leftist and treasonous foreign imperialist ideas and continue leading Clarkistan into the century with the confidence of all right thinking Clarkistanis".
.
In a separate report, the Chief Electoral Officer is on a sabbatical to Pyongyang and Havana to learn about how elections are meant to be held. An investigation is underway into charges of treason among the staff of the Electoral Commission who have acted in a manner contrary to the popular will. When asked what law the staff were meant to have broken, the President of the Worker's Party said "it's not clear, but we will clarify it shortly so that we can be sure of the illegality of those who are working against the people". (CCNA - Clarkistan Central News Agency)
Posted by Libertyscott at 2:04 pm

Brilliant!
But not funny--it's too close to the truth.

But not funny...its an insult to the truth.

If I wrote a long and silly comparison, likening the National Party to the Nazi's you, or the very least a queue of conservatives, would pile into me, labeling me a "vile person" for making an inane moral equivalence, and insulting the memory of the 6 million Jews who were their victims.

Well Scott....you have just defamed the memory of the 30-60 odd million(no-one quite knows how many) Russians who died at the hands of the real Stalinists, real victims of real tyranny....but hey why take you seriously, you were just being clever in an undergraduate sort of way.

Nonsense, it is political parody of the type that has existed for many years in Western societies, the Competent and Popular blog has existed for some time (although it has been dead for months) and does the same. I am using humour (allowed in our free society) to make a point. It is wrong, everywhere for any government to use taxpayer's fund for campaigning. To claim the pledge card is not about seeking votes for Labour is a denial of the truth, a massaging of facts of the type that Marxist-Leninist regimes are masters at.

THAT is what I am getting at, the unadulterated evasion of what was done. The endorsement that, regardless of legal details, it is ok for taxpayers to pay for the campaigning of the party in government.

You think it is ok, I think it isn't, I think if it was done in a developing country under UN observation it would be frowned upon as an irregularity. Stalinists didn't allow humour, and if you think I seriously believe Labour is equivalent to Marxism-Leninism you are wrong - it is just at times - such as this - the language used is not that different, and I will happily use parody with Nazism when they or the Nats act using similar language.