John Prescott and the unfortunate size 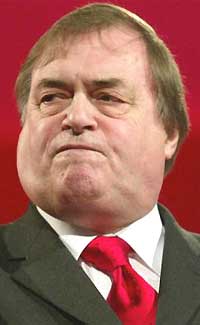 British tabloid, full of gutter journalists who are interested largely in creating scandal and destroying any semblance of dignity in order to titillate people who don't really give a damn about major social and economic issues - but would rather sell newspapers by pandering to thr worst of people. However, they can also be very amusing or just present you with imagery that you’d rather not know of. Like UK Deputy Prime Minister John Prescott’s allegedly tiny penis. David Farrar has blogged on this, and displayed the image the Sun published of his allegedly cocktail sausage size penis. Cactus Kate was right in her condemnation of Tracey Temple – no aesthetics at all, plus a penis a third of average length. Hasn't she got a battery powered friend?
.
On the other hand - Prescott probably gave hope to legions of old obese small dicked men who don't necessarily have to pay for it. After all Ron Jeremy did well from being ugly fat and well hung, John Prescott has power to replace his penis.
.
Prescott deserves all this of course, after having the state pay his council tax and gaining the title “Two Jags”. This followed his hypocrisy of promoting public transport but never using it, such as him and his wife going by car for 250 metres, because he was too lazy to walk and his wife needed to protect her hair. He also lied in 1998 claiming he was going to Hull by train, when after three miles he got off the train and hopped into his Jag for the rest of the trip. The 250 metres is just lazy, the Jag made sense – but not for a leftie Labour politician wanting everyone else to go by train. He has also left his Jag parked in a disabled spot. Charming.
.
On the other side, he gained kudos by punching a protestor who threw an egg at him. Any self respecting man would do the same.
.
So while his statist busybody nature means he tells others what to do, and then does what he likes is annoying for the hypocrisy, he also does have a rather laissez-faire attitude to life himself. That in itself is admirable - and for a man who spent his whole life with a tiny penis, and hasn't bothered to get it enhanced (even though he could undoubtedly afford to), such confidence is remarkable.
.
Although it is possible his penis retired in size due to atrophy, he quite probably spent his life growing up wondering why he was to be condemned by genetics for his paucity of phallus. Try not to imagine his first time, assuming the woman concerned had seen one before (if not, then so be it) - the nervousness. Or maybe he just punched anyone who hassled him about it. He grew above his ding-a-ling, or rather out and over it.
.
Hold on, he told the Police when he was 13 that he dad kissed another woman. Tell tale!
.
So if only he would retire, he can punch people, eat what he likes, shag whoever is willing and drive around in his Jag - then he'd leave us all alone.
.
Daily Mail tales of Prescott here and here
Posted by Libertyscott at 10:02 am