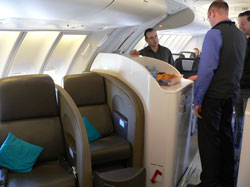 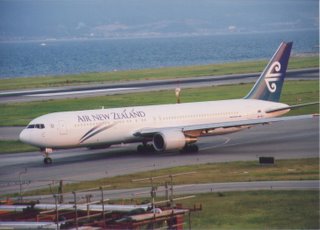 Air NZ Chair Rob Fyfe has announced that by 2010 the airline will open up a host of new long haul routes:
.
- Auckland to London via Shanghai (opening up via Hong Kong in October);
- Auckland to Santiago (competing with LAN);
- Auckland to Sao Paulo (linking up with Star Alliance partner Varig, which is nearly bankrupt);
- Auckland to Vancouver (no doubt codesharing with Air Canada, which has already announced it is starting Sydney-Vancouver via LA shortly);
- Auckland to Beijing;
- Auckland to Mumbai.
.
These are ambitious plans, with the first direct flights to Brazil, Canada and India, linking growing markets for tourism and trade. This year Auckland-Shanghai is expected to commence, as is the 2nd daily flight to London, but through the much better hub of Hong Kong rather than LA. This suggests the airline will need more than 4 new Boeing 787s, as it needs that many to replace its remaining 767s alone (which fly to Perth, Papeete and LA via Pacific Islands).
.
So isn't it about time that at least some of the airline was privatised to give it the capital to buy more planes?
.
By the way, while 2 of its 8 747s are still to be refurbished (1 is in the workshop at the moment) with the new seats (business class pictured) and video on demand entertainment system (all London and San Francisco, and most direct LA flights now use refurbished 747s), the 767s are being tarted up (pictured) and look now like the Airbus A320s on the inside. The fifth 777 arrived in the past week and is destined for the Auckland-Hong Kong route, replacing a 767. At the moment 777s operate on Auckland-San Francisco, Auckland-Singapore, Auckland-Tokyo Narita and selected services from Auckland to Australia. Once the sixth 777 arrives in late July, Auckland-Osaka Kansai will go from a 767 to a 777, meaning all of Air NZ's flights to and from Asia will have the new product - about time!
Posted by Libertyscott at 8:38 am