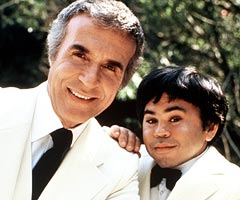 Aaron Spelling died on Friday following a severe stroke he experienced on 18 June.
.
He produced hundreds of TV series and episodes, including Starsky and Hutch, Charlie’s Angels, Fantasy Island, Hart to Hart, Dynasty, The Love Boat, Melrose Place and most recently, Charmed.
.
Now none of these will ever be seen as brilliances of drama or comedy, but he was instrumental in creating a genre of storytelling with drama and comedy that was immensely successful and popular. That popularity was due to it being light entertainment – who can forget Mr Roarke and Tattoo on Fantasy Island (pictured), which I remember watching as a child, or the cheesy Love Boat.
Posted by Libertyscott at 11:37 am