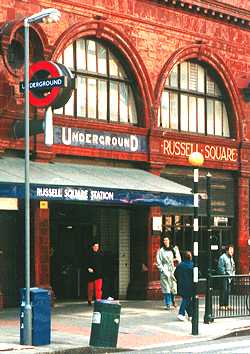 That is what terrorism is about. The murder is simply the means to that end. Today exactly one year after I have posted this, 3 bombs went off within 50 seconds of each other here in London. One each on two Circle line trains, going off between Liverpool Street and Aldgate, and another at Edgware Road. A third bomb went off on the Piccadilly line between Kings Cross and Russell Square. A fourth went off an hour later on a bus in Tavistock Square. 52 people were murdered, hundreds more injured, around 20 seriously. I catch Piccadilly regularly, as my alternate route to work. The location where the bus bomb went off is also the location of the bus route I sometimes catch as well, if the tube is closed. This morning I took the usual convenient tube route that was not bombed, but I still thought about it. It is one thing to live in New Zealand and watch the news, another to remember that every single day, London faces a terror threat. A real one. The million people who catch the tube every day, the other million who catch the buses (some the same people), those who work near major political, economic or social landmarks, like I do (right next door to one), think about that bag that lies there, the people who get on the tube and look nervous and Arab/South Asian. It is inevitable. It is about your life after all.
.
I wasn’t here when the bombings happened, but I was here when the second lot of attempts happened. I work very close to a well known building that could maybe be a target, but damn them to hell. London has gone through worse.
.
The blitz was perhaps the scariest time for this city, and 43,000 people were killed in Britain during it. During the first phase of the blitz, every night for three months, 200 German bombers bombed London. There are plenty of people alive who can remember that, and they didn’t run – they didn’t try to “understand the German point of view”, and didn’t apologise.
.
They didn’t blame the victims, they fought back. Nazi Germany was defeated, unconditionally. Germany today bears little resemblance to the totalitarian war machine that it once was, it is now the fourth largest economy in the world (China recently nudged it out of third) and a force for peace and stability.
.
London also suffered under IRA bombings through the 70s and 80s, although the casualties were low in number. Fear was the main driver. Fear removed rubbish bins from the tube, saw CCTV cameras installed and fear saw thousands avoid the tube one year ago after the bombs.
.
Today London is defiant. The evil of the terrorists, who happily see the blood of hundreds of innocent people, of all political beliefs, faiths or no faith and nationality, is not winning in London. The city thrives, it thrives with one of the most diverse populations of any major city in the world. There are probably about 7,000 people in this city right now who supported the bombings and would commit more – that represents the proportion of adult Muslims who in the most conservative polls endorse the terror attacks. I simply wish they would leave, they are not welcome.
.
However, perhaps the best statement I have seen comes from no other than Mayor Ken Livingstone. Livingstone was in Singapore at the time, at the International Olympic Committee meeting, following London’s successful bid for the 2012 Olympics:
.
“Finally, I wish to speak directly to those who came to London today to take life. I know that you personally do not fear giving up your own life in order to take others - that is why you are so dangerous. But I know you fear that you may fail in your long-term objective to destroy our free society and I can show you why you will fail. In the days that follow, look at our airports, look at our sea ports and look at our railway stations and, even after your cowardly attack, you will see that people from the rest of Britain, people from around the world will arrive in London to become Londoners and to fulfil their dreams and achieve their potential. They choose to come to London, as so many have come before because they come to be free, they come to live the life they choose, they come to be able to be themselves. They flee you because you tell them how they should live. They don't want that and nothing you do, however many of us you kill, will stop that flight to our city where freedom is strong and where people can live in harmony with one another. Whatever you do, however many you kill, you will fail.”
.
For one of Britain’s most renowned/notorious leftwing politicians, Livingstone has set an example. He was right, they will fail and they have. May they go hide in their pathetic little warrens of hate, or go where hatred is glorified and live in the dry dusty dirty heat of it all. Go live in your caves, form a little society of reason hating, anti-individualist primitives, enjoy the life of pre-civilisation – you add nothing to the modern world.
.
I am slightly nervous I must admit, but I am not changing my habits to suit Al Qaeda, which released a video to Al Jazeera yesterday of one of the suicide bombers for the 7/7 attacks. Al Qaeda should be defeated, as Nazi Germany was – and nobody who believes in freedom or civilisation, across the political spectrum, should rest until the last member of Al Qaeda surrenders or is killed. The people of London, let alone New York, Madrid, Baghdad and elsewhere, deserve nothing less.
.
They certainly don't deserve the excuses seen in the Guardian this morning.
.
Faces and obituaries of the victims. BBC
Events of 7 July BBC
Grief, Fear, Hope The Times
Posted by Libertyscott at 8:50 am