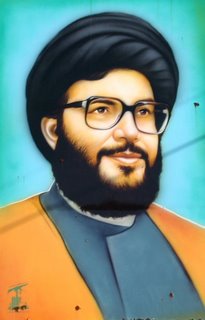 Yes, these are the people that so many are willing to appease. Hizbullah leader Sheikh Hassan Nasrallah, on Al Jazeera is reported as saying that the two Arab children killed by one of Hizbullah's rockets in Nazareth were "martyrs for the Palestinian cause".
.
Pig.
.
That's a great excuse. Of course, if they were Jewish, Christian or atheist children, he would damn them to hell. By the way, that goes for your children too.
.
You see Hizbullah's patrons, Iran - that nice regime that has not been meetings its obligations under the Nuclear Non-Proliferation Treaty, and wants to wipe out Israel and the USA, should know about children being martyrs. It used to send teenagers into war.
.
In addition, on May 23, 2005, Amnesty International reiterated its calls to Palestinian armed groups to put an immediate end to the use of children in armed activities: "Palestinian armed groups must not use children under any circumstances to carry out armed attacks or to transport weapons or other material". In 2002 current Palestinian President Mahmoud Abbas said "At least 40 children in Rafah became cripples after their hands were blown off by pipe bombs. They received 5 shekels [slightly over $1] to throw them". Not Hizbullah? No, but its spiritual allies.
.
and yes. I know Israeli attacks have killed children in Lebanon. There is a difference though. Israel wont call them martyrs for its cause, and wont celebrate their death. Israel doesn't want to wipe out Lebanon. Israel was not the party that started this conflict - Hizbullah did, and it is responsible for putting at risk Lebanese civilians who live near the sites where it launches attacks.
Posted by Libertyscott at 11:27 am

Isn't that a childhood fallacy?

Well, depends if you think Israel and Hizbullah are moral equivalents - I don't believe they are.

I will blog more about Israel another time, I don't believe that it is always right.