Syria on the warpath 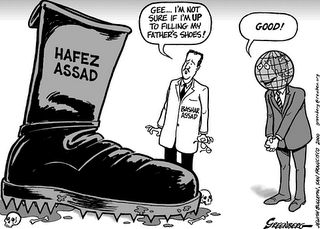 According to the Daily Telegraph The President of Syria appears to be wanting to fill his father's boots as a warmongering murderer.
*
"Peace loving" Syria is talking about military action to recapture the Golan Heights. The Golan Heights are land occupied by Israel following the Six Day War, because ever since Israel was founded in 1948, Syria used the land (which comprises a hillside and plateau) as a base to shell Israeli villages and shoot at farmers. Israel has kept the land for self defence purposes, and although many of the Arab residents departed during the war, it now has a stable population of around 30,000.
*
If Syria attacks Israel to recapture the Golan Heights, expect the peace movement to be muted - the leftist anti-Americans will say it is "legitimate", showing all of their pretenses about how war is always bad to be vapid ravings of hypocrites.
*
Syria's regime, of course, should be subject to villification, flag burning and effigies of its President Bashar el-Assad being burnt. It wont happen though.
*
You see Syria's record of being a totalitarian one-party state, which tightly controls all media, all protests and arrests without trial opponents, tortures them and imprisons them. Journalists writing anything critical of the regime face jail terms.
*
Syria maintains a permanent "state of emergency" justifying Muharabat (secret police) action with impunity.
*
It is led by the second eldest son of Hafez el-Assad, its President from 1970 to 2000. Assad applied hereditary succession, to this one-party state (not unlike North Korea), and Assad ("our leader forever" in propaganda) cultivated a personality cult surrounding him and his family's achievements. The eldest son, Basil, was meant to succeed his father, but died in a car accident - thankfully - as he had a reputation for being ruthless, getting family members to kidnap girls for him. Bashar is a trained opthalmologist, and not a military man. He is likely facing much pressure internally to be "tough" as the likelihood of a coup is significant - after all, the Assad clan have many enemies and are members of the minority Alawite ethnic group - they are not Arabs. Alawis have done well from the regime, much to the chagrin of some Arabs.
Bashar had to have the rubber-stamp "Parliament" change the constitution within hours following his father's death to allow him to succeed - given he was 34 and the old constitution required the President to be at least 40. He was elected with 97.29% of the vote with no other candidates - wonderful stuff!
*
So Bashar is being the tough dude. He presumably will waltz over the UN Peacekeeping troops on the sliver of the Golan Heights between Syrian and Israeli control and start a war. He could have got back most of the Golan Heights peacefully, as Israel offered it to Syria in 1999 peace talks. Syria demanded all of the land, Israel refused so they parted.
*
Israel conquered the Golan Heights fair and square, as Syria used the land to attack Israel. If Syria wants it back it should simply meet Israel's demands - cease supported Hizbullah and Islamic Jihad, cease interference in Lebanon and recognise Israel's right to exist. If Syria attacks Israel, Israel should respond with as much force as is necessary to clip Damascus's wings. Of course, if Syria uses its chemical weapon arsenal - then there will bloody regime change in Damascus, I suspect Israel will bomb the daylights out of as many strategic targets as possible in southern Syria.
*
Bashar should abandon this policy of confrontation and follow Gaddafi - he should liberalise his country, negotiate a peace treaty with Israel, leave Lebanon alone and give up supporting terrorists. He is only 41, he has just enough time to be thought of by Syrians and the world as the hero who changed his country from a totalitarian nightmare to a more open society. His father was feared and hated, if he wants to avoid a military coup, he might try to burn his father's boots and make some more comfortable shoes of his own - and stop stepping on Syrian citizens in the process.

Stories about life in Syria
Posted by Libertyscott at 2:28 pm