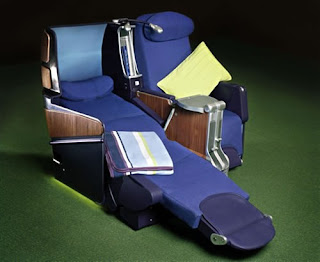 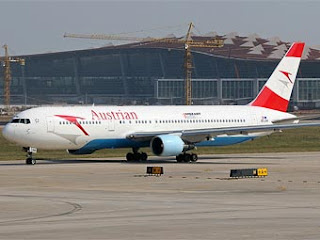 I recently has cause to fly to China from London, as BA was charging an extortionate fare for the direct business class flight, and I wont fly Air China for reasons I shouldn't have to explain, and I can always do with some Star Alliance points, I chose Austrian Airlines - which means obviously, flying through Vienna.

Austrian has a good reputation for long haul service, and I also read that Vienna airport is a breeze to transit through and Austrian waits for connecting flights - so why not?

Well first, what was good?

Vienna IS a breeze to transit, when returning it was literally out one gate and there's the next one less than a minute away. Even arriving from London when we had to be bussed in the rain from the tarmac (grrr), the walk from the entrance point to the gate took 2-3 minutes. No further than going from checkin at Wellington to the Air NZ gates. Light years ahead of the rabbit warren of Frankfurt.

Secondly is the food. Austrian Airlines has a dedicated onboard chef in business class on long haul. Yes a chef, not a trolley dolly heating up pre-packed food in ovens, but actual cooking. The starter is an antipasto trolley with around 12! - yes 12 different starters, hot and cold, and soup to choose from. The dessert, fruit and cheese trolley isn't much different - with a wide range available. The mains is cooked as you like it, so steak can be rare, medium or well done. You order breakfast with eggs how you want them! This wasn't done on a 747 either, it was a 767! However Austrian 767s are far nicer than Qantas and Air NZ ones, it also has brand new 777s. Austrian uses a good part of the front to put in the galley. It also offers 10 different varieties of coffee, and an ample selection of liquor. Seriously, Austrian Airlines offered the best long haul airline food I have ever had, and makes you realise how second rate heat and eat food can be. This SHOULD be the standard for business class food. Even the short hops to and from London had high quality hot meals that were quite delicious.

Thirdly is the service. The crew are willing to please, helpful, friendly, and respond quickly to calls and accurately, and are very keen to be perfectionists. Indeed, easily the best service of any continental airlines I have flown. Tall, multi-lingual, good looking, friendly, light years ahead of the moody trolley tarts for Virgin (and none of them can remember when they were) Atlantic. The strange orange uniforms don't complete put your off, and the chef wears a chef outfit as part of the deal. You get an amenity kit, which is fairly conventional and handy, and a decent blanket, but small pillow.

The longhaul business class seats. They are of the sloping flat variety seen in business class on Qantas, Lufthansa, Cathay Pacific and most Singapore Airlines flights. In other words, when you fully recline, it feels like you're lying on an ironing board which is leaning. The seats are also rather narrow. You see on the 767 the seating goes 2-2-2, whereas in economy class it is 2-3-2. The width of one economy class seats really only adds enough to cover the consoles between the business class seats. The good side is they are infinitely adjustable and have an excellent massage function, I got about 4-5 hours sleep on the overnight leg, so they are ok - and certainly light years ahead of any old fashioned recliners. There is some useful storage places in the seat, but it could simply do with being wider and properly flat.

The inflight entertainment. Essentially it is like the old Air NZ business class multi-track entertainment system with slightly bigger screens (sort of like the Air NZ economy class ones in size). Not interactive, but quite a few channels. OK, but needing replacement.

The lounge in Vienna. Frankly, this was crap. The business class lounge is pokey, has a small bathroom, no showers (which are highly desirable after a 9 hour flight), and a selection of snacks and drinks that are mediocre at best (Koru Club in Wellington is light years ahead). Free wifi is welcome, but a distinct lack of comfortable seating - and at certain times (and my flight to London was delayed over an hour and a half) people struggled to find seats.

Finally, the business class seats on the European route were complete crap. I'm used to this, but these literally were just economy class seats with the middle seat blocked out on the A320 Airbus, but on the smaller jet there wasn't even that. Business class within Europe gave me a hot meal and first off the plane, otherwise I could've been flying Trans Tasman on Air NZ economy class and been more comfortable.

So the conclusion? Fly Austrian if the food and service matter first, as both are good, and despite the poor quality lounge in Vienna it is still light years ahead of almost all United Airlines lounges. The long haul seats are alright, better than other sloping flat seats I've been in - but you can't beat true lie flat. The entertainment system is ok, no better than that which most BA and Qantas planes have, and Vienna is easy to transit - if you don't have the pain of waiting for your flight. The food and service are worth trying, and despite being part of the Lufthansa group of airlines, Austrian is well ahead of Lufthansa in every respect. It is a pity it has stopped flying to Australia!
Posted by Libertyscott at 8:59 pm