Those looking forward to flying on the "superjumbo" new Airbus A380 from a New Zealand airport look like they'll have to wait a year. Emirates is the first airline to announce flights with the A380 to/from Auckland. According to Business Traveller, Emirates daily flight EK 412 from Dubai to Sydney (and EK 413 in reverse) will be flown by an A380 from February 2009, and the flights will be extended onto Auckland (the flights currently continue to Christchurch). Emirates will be the third airline to fly the A380 starting September 2008. 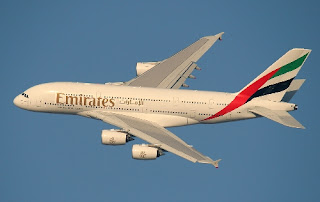 ~
Presumably there will be some rejigging of flights between Auckland and Christchurch, unless Emirates is dropping Christchurch, but anyway Emirates does promise its A380s will introduce new first, business and economy class products on board. That will be interesting given the world beating Singapore Airlines products on its A380s, although the number of seats Emirates is installing on its A380s will range from 489 to 600, whereas Singapore Airlines only has 471. I suspect Emirates will be flying the low density long haul version on this route though, as it seeks to compete with Singapore Airlines, Qantas, BA and Virgin Atlantic for the lucrative Sydney-Europe routes.
~
Anyway it will be good to see the whalejet flying regularly to and from NZ. This will undoubtedly put pressure on airfares in all classes. Frankly, the odds are that no other airlines will be flying A380s to NZ in the near future. The other airlines that have ordered A380s that currently fly to NZ are Qantas, Singapore Airlines, Thai, Korean and Malaysian. Out of them only Qantas and Singapore Airlines currently fly their biggest aircraft (747s) into NZ, and in both cases the majority of their flights are on smaller aircraft. I doubt it is worthwhile either Qantas or Singapore Airlines flying such large planes on any of their services to NZ.
Posted by Libertyscott at 11:54 am

Email ThisBlogThis!Share to TwitterShare to FacebookShare to Pinterest
Labels: Aviation