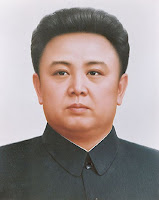 Thank you so much for your generous birthday gift offer. I knew the pending missile tests would get your attention. I get so ronery (yes I saw that stupid Team America movie too), sorry little joke. I know Bill loves jokes, like I love ladies. I know you like them too.

I’ll be 67, and there will be a huge party in Pyongyang today because the people here love me (see last year). Sorry you can't come, because you'd see millions out to see me, like the ones for your Great Leader Obama.

It pleases me so much at the magnanimity of the US imperialist aggressors that you want to make peace with the Democratic People’s Republic of Korea. You have finally recognised that you were defeated in 1953 by the brave Korean People’s Army, much like my father singlehandedly kicked the Japanese scum out of Asia.

I know some say it’s because you now have Great Leader President Obama, who I see organises the same sorts of displays of public affection and fawning adulation that I and my father long have enjoyed. That shows me how much closer our countries have come. Bush didn’t understand mass adulation like Obama does. Your husband Bill is clever, letting the negro man take over to generate adulation, whilst putting you there as the real General Secretary. You don’t let people out of the family take over now do you? I mean, just because Great Leader President Obama has a background in progressive politics that made me smile don't mean you let the family down.

Anyway your gift is enticing. You want to give us the peace treaty we have long demanded, diplomatic relations and to take money from your taxpayers to help build my socialist economy. CNN said you want to” assist in meeting the energy and other economic needs of the North Korean people”.

That’s wonderful news. The evil Bush overthrew one of our main markets for sophisticated aeronautical delivery devices, the grassroots drugs market is tough, and those Iranians aren’t wealthy enough to buy those new clear materials we try to sell them (your intelligence got the pronunciation wrong). I can’t seem to sell enough vinalon and magnesium clinker to be able to import Hennessy, Mercedes or computers for my humble country houses.

However, I know you’ll love my plans for the economy. There is a great hotel to be finished in Pyongyang, we want to set up a worldwide TV channel to spread the Juche idea of self reliance (which is catching on now capitalism is dead), and there are hardly any statues of me around. We have loads of workers of all ages in mountain camp homes where they eagerly work seven days a week, with enthusiastic supervision, and the lowest carbon footprint imaginable, ready to help build consumer products for your people. I also want faster internet access, so I can see the hard working young Swedish women who do so much to entertain workers of many lands with their lack of modesty. I know you’ll appreciate them.

Your gift it reminds me of the funny gift your husband Bill gave to the Korean nation in 1994. You were to spend US$4 billion giving us light water nuclear reactors and 500,000 tons of free fuel oil paid for by the US taxpayers (and some of your satellites) in exchange for us stopping plutonium enrichment. He’s such a laugh. We figured that since I run and control everything, and Bill joked about that girl (I could teach you all lessons on handling concubines), we could have the gift AND enrich plutonium. We made some weapons, let one go off, and hey we taught that Bush a lesson. I know you appreciate that.

So how about this, give us the aid, the peace treaty, pull your troops out of the south of Korea like we always wanted, and we’ll let you see all the facilities you have talked about. We will report how your aid money is being well spent and the Korean Central News Agency will report how the country is succeeding so well, like it did accurately since the 1950s.

Get the Japanese imperialists to give us compensation too, and hey we can all get together, and have a bomb. I mean, we’ll have destroyed that bomb, and reunited the country too.

Oh and can you make sure you send Trey Parker and Matt Stone to be your first ambassadors? I'm sure they'd like to meet the greatest film director in the world - me! I'd like to correct them on their depiction of my country at my special film production holiday camps.

Email ThisBlogThis!Share to TwitterShare to FacebookShare to Pinterest
Labels: Dictatorships