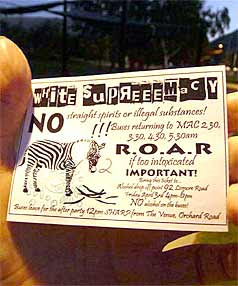 Seriously, is Mt. Aspiring College the least worldly most naive high school in the country? Or a secret hot bed of neo-Nazi knuckle draggers?

Wanaka is such a beautiful location, does it just mean people there don't read, watch TV or read history?

Does it mean the school curriculum is so utterly devoid of history that so many of the staff and students are just plain ignorant?

Someone better find out - I bet the semi-evolved grunts in the National Front will be getting their tiny penises (they are 90% "men") all excited about how they need to have their conference in Wanaka as a result of this story.

"many students have already got their costumes organised after depleting all the stocks of white coveralls from Wanaka's Mitre 10 hardware store. Manager Mark Watson said he had no idea the $7.98 clothing item had been so popular when contacted last night, but after a quick check of his database confirmed he had only large sizes of the boilersuit-type clothing left."

Only the slim to average sized stupid and racist students are going. Although one report does suggest a bit of mischief making:

"Last year they went on sale two weeks earlier and this year it was only a few days before. They were hiding them until the last minute. "Those kids are not as dumb as the principal is making out."" says "angry mother".
Bloody hell! Parents of Wanaka. Airfares to Australia are NOT expensive, probably cheaper than to Auckland if you scoot to Queenstown. Take your kids at least to Aussie (well Sydney and/or Melbourne anyway) at least twice before they are 13.

Show them where the news channels on Sky are.

and most of all, show them images of white supremacists in their natural environment (above).

(Credit to Stuff for the image)
Posted by Libertyscott at 2:50 pm

I'm going to go with the stupidity theory. The ticket says their party starts at 12pm