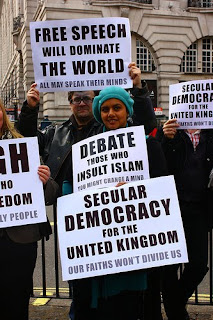 Yes, you read correctly. British Muslims now organised to defend the interests of the British constitutional system and freedoms.

On Saturday 31 October an Islamist group called Islam4UK had planned a demonstration to promote applying Shariah law in the UK. Its express purpose being the Islamification of British society. The group cancelled at the last minute, but a counter demonstration went ahead from British Muslims for Secular Democracy. More images of this can be seen here.

BMSD (don't get those letters round the wrong way!) expressly believes in the separation of religion and state, and for religions to flourish in the private voluntary sphere. While it intends to promote Islam and information about Islam, it strongly defends secular democracy, free speech, tolerance of other beliefs including atheists, and strong opposition to Islamism.

So if you wondered if British Muslims were predominantly either quietly acquiescent or secretly all wanting Shariah, this group aims to prove this wrong. May it grow and prosper and become the overwhelming voice for British citizens and residents who are proud of what the British legal-political system offers, and who happen to be practising Muslims in their private lives.

It is about time, and the posters that you can see come from images from the counter-demonstration on 31 October in London. In contrast to those who call for death to those who insult Islam, BMSD calls for debate and discussion.

Our counter-demonstration is based on our belief in, and commitment to, those liberal values that define the British state, including legal and constitutional equality for all, equal rights for women and minorities, and religious freedom, including the right to be free of faith. We are turning out to defend all of these virtues of a secular democracy that Islam4UK so despises and daydream of taking away from the British public.

Be nice if the British government believed in them too.
Posted by Libertyscott at 11:49 pm

These people have a snow ball's chance in hell.

When you promote this stuff as a means to deflect from the real and present threat, (with the underlying objective of justifying the Libs pro-immigration views), you're just white anting freedom again.

That's the reality, no matter how many words you might write here trying to smoke screen it.

There are more than five, given the Board of Trustees has seven. Good to see you giving the organisation the benefit of the doubt, given I haven't noticed any of the mainstream UK political parties being so openly in favour of British values like this organisation. Did you look at the website and have a read?

Maybe or maybe there isn't a snowball's chance in hell, but is it not positive that there are Muslims challenging Muslims?

I did NOT promote this stuff to deflect from "the real and present threat" which you have chosen not to outline.

It's not the reality, you're wrong. You've impugned my motives based on nothing.

Good to see. I think the most telling comment was at the end, and unfortunately all too true:

Be nice if the British government believed in them too.