I was awoken to the news at around 2am GMT, with reports coming through my wifi radio on ABC News Radio, as very little was on the international TV news channels I can get.   The events do not need me to express the sadness and horror about the destruction, the death, the injuries and the devastation of Christchurch. 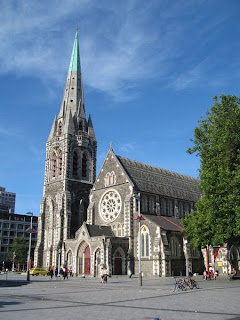 Like all, I can only hope that the death toll does not grow, that people are all accounted for, as all those who I know in Christchurch are.  With both air and rail links into Christchurch temporarily severed, the difficulties of getting in and out are exacerbated.
The effects are immediate for those who have lost family and friends, and those badly injured, and have lost precious possessions.   Think also for the tens of thousands who are now wondering if they should rebuild and remain in this city.   It is easy to say hasty decisions shouldn't be made, but the effects of this will be deep for the entire country.   Those who think that reconstruction after this is beneficial for the economy are of course fools.
I note Air New Zealand is putting on special NZ$50 one way fares for all domestic flights to and from Christchurch from tomorrow through till Friday, with a special Boeing 747 flight to and from Auckland to operate to get large numbers in and out efficiently.   I hope those who need to return, and those who are visiting and need to return quickly can get to do so with as little pain as possible.   I hope also Air NZ ensures the 747 isn't filled with planespotters seeking to fly in flat beds in business class in the nose or upstairs for cheap - by blocking such seats from pre-selection by non-status frequent flyers.
So I have put a photo of the cathedral up, because this is the symbol of the city- but the city itself is its people, and may the coming days, weeks and months they find their hearts and minds able to rebuilt and live, whilst for now the battle is to find those missing, and to keep safe and secure those who remain.  Hopefully also the Police and public can have sufficient presence to avoid the scum of looters seeking to profit from the misery of others.

My best wishes and thoughts to them all.

PS:  Winner of the most inappropriate comment from a New Zealand politician goes to Catherine Delahunty with this tweet:
greencatherine Catherine Delahunty
"A grim day with the horror earthquake and welfare report came out worse than I ever imagined"
Yes, the government's welfare report is equivalent to an earthquake that has killed dozens of people.  I may disagree with your colleagues, but they are mostly capable of some thought before saying such things.
At least it is better than blaming the victims for their disaster.
Posted by Libertyscott at 10:13 am