Dennis Rodman in Pyongyang is interesting for more subtle reasons

Had anyone said a week or so ago that ex.NBA basketball player Dennis Rodman would be hugging Kim Jong Un, all North Korea watchers would be thought it absurd.

Yet it has happened.

Now I'm not going to go into what Rodman said, Curtis Melvin's blog - North Korea Economy Watch - has the best coverage, and you should watch George Stephanopoulos's interview with him, where he takes on Rodman talking about Kim Il Sung and Kim Jong Il being "great man" and slips into moral relativism.   Rodman is at best naive, and at worst a willing idiot for a despot.  If he reads the Human Rights Watch report, accepts it and visits Kim Jong Un again to discuss it, then he truly will have made a breakthrough unheard of before.

However, what it looks like is a young dictator happy to accept a childhood hero.  Kim Jong Un loves basketball, probably from his days from being schooled in Switzerland (unlike his father and grandfather, he has not been raised away from the West).   He's just pleased to have such fun, although he will probably have been made aware of the political significance of the move.

For a start it makes the Democratic People's Republic of Korea (DPRK) look cuddly and friendly, and Rodman has been an almost perfect diplomat,  for the DPRK, in making the place look detoxified, somewhat.  The hope is it will put pressure on the Obama Administration to talk, shown by Rodman saying Kim Jong Un just wants Obama to "call him".  Seems simple right, but it is what the DPRK has wanted since 1953, it wants to sideline the Republic of Korea (ROK) in Seoul, which it considers to be illegitimate, and negotiate directly with the US, which it constantly claims as occupying south Korea.   Of course, Kim Jong Un knows this to be a nonsense, but the Kim regime's priority has always been to one-up the ROK.  Obama calling Kim Jong Un, weeks after the people of the ROK elected a new President - a woman no less - would be a huge snub to her.  A core component of US policy (and indeed Japanese and dare I say Chinese policy) is for the two Koreas to talk to each other.  The US role is to maintain a military deterrent (including nuclear) against the DPRK, as the ROK does not have chemical, biological or nuclear weapons (the DPRK has all of those).

The more curious element is the image above.  The DPRK is fervently racist, as described by Brian Myers in this book (although I disagree with some elements of it), with Koreans thinking they are pure and clean.  The regime has forced women who bear children of Chinese men to abort, it looks down upon non-Koreans, and has countless images depicting Americans as hooked nosed and dirty (reminiscent of how the Nazis portrayed Jews). 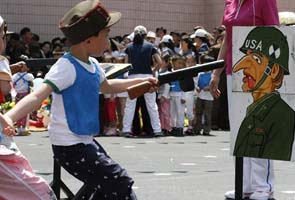 The idea that an African-American could touch, let alone hug a leader of the DPRK is utterly unprecedented.  The extent to which that image is disseminated in the DPRK is unclear (most north Koreans don't get television, as they don't get reliable electricity outside Pyongyang, so they will get reports from radio and newspapers).   However, while Kim Il Sung shook the hands of umpteen African dictators, the embrace given to an American sportsman would have been absurd (although he did meet Jimmy Carter and Billy Graham, they are hardly of the same ilk).

Perhaps Kim Jong Un thinks that Obama will listen to Rodman, because of racial brotherhood?  It seems a little absurd, but from a Pyongyang perspective could it be a factor?

I don't think what has just happened in Pyongyang is significant from a diplomatic point of view, I think it shows a young dictator having fun.   One who wants the outside world to come, on his terms, and wants to be noticed.  Just as noticeable is the significant boost to tourism, as there has been a dramatic increase in tours to the country.

That's a good thing, as the more exposure locals get to foreigners the better.  My hope is that if Rodman does go back, he can deliver a message from the US and ROK administrations (and he should visit the south before he visits the north again), which is one of wanting to defuse tensions and to encourage the north to actually open up and reform.   Bear in mind that absolutely nothing else has worked in the 21 years since the end of the Cold War, and it would morally wrong and futile to continue the endless cycle of talks, bribery, DPRK lashes out, sanctions, talks.
Posted by Libertyscott at 9:24 pm

Email ThisBlogThis!Share to TwitterShare to FacebookShare to Pinterest
Labels: Korea

This is interesting. Thank you. Do you know how the North Korean media dealt with the coverage of the 1988 Olympiad in Seoul? Was it balcked out? Did competitors from the North compete? etc...

There was a 1988 "Olympiad" in Pyongyang, attended by Cuba, Ethiopia and I think Albania, as Kim Il Sung called for a boycott as Seoul refused to share hosting with the DPRK. He hoped to convince the USSR, China and others to attend his games, and a stadium was built for it. Naturally it was rather pathetic.

The DPRK media covered the Pyongyang games, I am unsure what words were used to describe it, but there was absolutely no coverage at all of the Seoul games. Bear in mind the 1984 LA games were boycotted before that, but at least that could be noted as it was a pan-Soviet bloc boycott (except Romania, which went with Moscow's blessing).