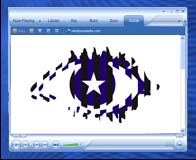 Celebrity Big Brother UK! no not the latest surveillance system devised by bureaurats in London to watch you online or on the road - but the popular reality TV show on Channel 4.
.
After my little spiel on French culture I will digress with some mass culture - the voyeuristic pleasure gained in watching celebrities be watched and stuck in a house for days on end.
.
The quote in the title of the post is the BEST quote so far from this programme, it was Dead or Alive singer Pete Burns talking about slapper Jodie Marsh. Now if you haven't seen Pete Burns since "You Spin me Round like a Record" you'll be shocked, as his cosmetic surgery has been drastic, and not necessarily how he expected (the lip surgery cost him a fortune to fix after it went wrong).
.
I never watched any other "Big Brothers" but I ashamedly have been seduced by the sheer entertainment value of the people in it:
.
Starting with Chantelle, a dizzy blonde Essex girl (which, despite reputation, can be good), unfortunately not that bright, though rather sweet really – she didn’t know what a gynaecologist was when it was being discussed, and didn’t even know that she should have known. She’s said many naïve things, you’d think she was around half her age, she’s only endearing because she is kind – but now she is an instant nonlebrity – famous for doing nothing other than appear on this programme. She convinced the others for the first 3 days that she was a celebrity leading a non-existent band called Kandyfloss with a "hit" called "I want it right now" - by convincing them of this, she got to stay. However, I think this is largely because two of the other musicians (Maggot and Preston) don't rate themselves too highly anyway.
.
David Farrar has blogged about the extreme leftwing Saddamite George Galloway appearing on Celebrity Big Brother a man who said in an interview with the Guardian that the collapse of the Soviet Union was a tragedy. That tragedy that cost 30 million lives, that invaded Poland, Hungary, Czechoslovakia, Mongolia, Afghanistan, Latvia, Lithuania and Estonia, ran a totalitarian state of brutality and lethargy. Great one George.
.
However, he isn’t half as interesting as the rest. NBA basketball star and notorious womaniser (and occasional cross dresser) Dennis Rodman, is by far the most famous person there (internationally) and looks distinctly uncomfortable, probably because this is the longest time he has spent without having sex for a while – and he has tried to get into the knickers of the three sexiest women, Traci (ex. Baywatch), Jodie (Essex porn channel host, nosejob victim and slapper who complains endlessly about how she is misunderstood and quite intellectual) and Chantelle.
.
Jodie Marsh is a bitchy model, who got her nose done when she was 15 (big mistake it looks far from good) with big self esteem issues that she handles by being loose about sex, talks about it all the time, and by crying about how hard it is to be famous, to be called a slapper, to have her boobs criticised, then she criticises others. She has been in an orgy, wants to have sex with Pamela Anderson and likes girls as much as boys (and I mean boys, she likes them younger).
.
Then there is Pete Burns, the diva from band Dead or Alive (You Spin Me Round like a Record) who looks rather scary but is bitchy and incredibly funny. He disclaims that he is gay or a transvestite, but appears to be comfortable simply saying he wants to look the way he does and wear what he wants, but he is a man and is not interested in changing his sex. He’s my pick if only because he is comfortable about who he is, and has upset some of the others by claiming his fur coat is gorilla (which is almost certainly is not).
.
Michael Barrymore is the last interesting one, although he is a shadow of his former self, looking worn and tired and sad. I don't need say much more about him, except that he clearly looks like the UK tabloid media have chewed him up and spat him out and it has hurt.
.
So there you have it, while Brits will remain addicted to this, so will I – watching a range of semi famous people interact like goldfish in a bowl, being bitchy, being bored and half of them waiting for something to happen.
.
I’m hoping that Galloway is booted out this time – because he has been boring, and the prick deserves to lose this publicity vehicle (which has backfired both against his traditional supporters and the youth he was trying to target). He is evil.
.
If you want to keep up to date, go to the website here. If you are really addicted pay around £8 for continuous broadband video coverage access - I wont be, it helps to have digital TV!
Posted by Libertyscott at 11:57 am

I'd appreciate! I've been planning to get my nose straightened and this blog seems to be very informative for people like me that look out for info on rhinoplasty

Fuck off, your IP address and timestamp has been noted as:

Your ISP has been informed that you distribute spam, and you may face legal investigation for this action.