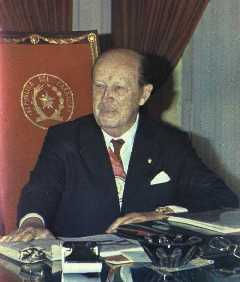 It would be nice to collect a set - Castro would be good to follow, but at least for now, there is cause to celebrate - Alfredo Stroessner is dead. Who? you say?
*
Most of you wouldn’t have heard of Alfredo Stroessner. He was the military dictator that told Paraguayuan what to do for decades, from 1954 to 1989. He was living in exile in Brazil since he was deposed, and finally at 93 the evil bastard is dead. He was the second longest lasting dictator in Latin America, after Castro – and fortunately Paraguay has been spared his brutal rule for 17 years now. (Where is Paraguay you might ask? Look it up!)
*
He was no Marxist, he was an old-fashioned militaristic fascist dictator – the type the left loathes, quite rightly. He hated communism, and Paraguay maintained diplomatic relations with the Republic of China on Taiwan because of it, with no relations with the USSR or any other Marxist state. The US was friendly towards Stroessner’s regime until the 1970s. Although he was fiscally prudent, his attitude to individual rights was increasingly abhorrent, with both the Carter and Reagan administrations having little time for him. His sheltering of former Nazis, like Josef Mengele contributed to this (he was of German descent which explains this mostly German language anti-Stroessner site). Despite what this website says, he was no US puppet - the closest he got was being warm to Lyndon Johnson.
*
He deposed the centre-right democratically elected government of Federico Chavez, because Chavez wanted to arm the Police! From then on, Paraguay lived under military dictatorship. There were “elections” which were either fraudulent or with only one candidate. His Colorado Party would dominate politics for decades to come.
*
Stroessner killed and tortured his political opponents, practiced corruption and suppressed freedom of speech. Several thousand are estimated to have been murdered, and many more detained without trial and tortured. He forcibly assimilated the
*
The only good thing that can be said is that he wasn’t economically insane, like Julius Nyerere or Castro. He commissioned the Itaipu dam, currently the world’s largest operational hydro electric dam by generating capacity. This has enabled Paraguay to export electricity, a rare commodity for international trading. However, the ends do not justify the means - he believed he knew what was best for Paraguayuans and anyone who got in his way got hurt!
*
The Aché people of Paraguay, an indigenous tribe, were subject to raids, kidnappings and enslavement by the army and a supportive weird Christian fundamentalist group - the New Tribes Mission, which sought to convert the Aché to Christianity. They were hunted down, enslaved and used for domestic chores and sexual purposes for years. It was somewhat genocidal, in that the regime and the New Tribes Mission essentially saw the Aché as inferior and able to be used for sport or slavery. The New Tribes Mission still exists, although the genocidal behaviour has ceased with the fall of the regime, and extensive publicity - the evil bastards continue to propagate their filthy philosophy to people who need something other than religion.
*
Stroessner WAS the last South American dictator, but Hugo Chavez has that mantle now. However, the left love him, ignoring his treatment of political opponents, control of the media and confiscation of private property. HE is anti-American and that is the religion of much of the intelligentsia of the western world.
*
Dictator of the month website
Posted by Libertyscott at 4:09 pm