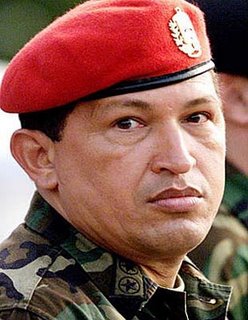 There was plenty of publicity for Venezuelan dictator, Hugo Chavez, and his UN General Assembly speech with its outburst about President Bush, and the smell of sulphur.
*
The wankclass of the western left (you know, they never live in council housing, drive hybrid cars, recycle and hate George Bush and Tony Blair so much) love Chavez and his oil money. London Mayor Ken Livingstone loves him too – he loves him so much that after inviting him to London, Red Ken is negotiating an agreement with Chavez for cheap diesel to fuel London buses. Apparently in return, Venezuela will get advice on transport policy, environmental policy, tourism, CCTV security monitoring and biometric fingerprinting (London is a leader on these things, not that you would notice).
*
Now given Chavez is quite keen on running the Venezuelan media and closing down opportunities for his opponents to campaign, it looks like Red Ken wants to help an old-fashioned leftwing dictator in the making. However, Chavez keeps showing his true colours with statements like this from the Sunday Telegraph:
*
“The descendants of those who crucified Christ have taken over ownership of the riches of the world, a minority that has taken over the gold of the world, the silver, the minerals, the water, the good lands, petrol… and they have concentrated the riches in a small number of hands."
*
Oh really?
*
Chavez has also said the US might have planned the 9/11 attacks. He said the twin towers could have been dynamited. Hmmmm yes. However, the anti-American left listen to him, which is why idiot linguist Noam Chomsky's book (which Chavez mentioned in his speech) "Hegemony or Survival: America's Quest for Global Dominance" is now number one on Amazon.com. Chomsky's pinup status remains -but this is not the place to pull him apart.
Posted by Libertyscott at 9:15 pm

Where is the place?

Try my blogroll, there is a link there. I get too furious with Chomsky, I might blog about him when his profile is raised again.