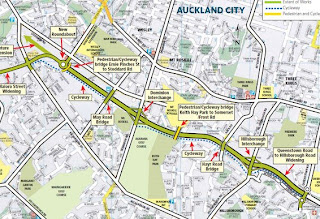 9 May will give Aucklanders a chance to walk and bike for the first and last time on a piece of transport infrastructure paid for motorists that motorists can use, and which will deliver significant benefits in reduced journey times and vehicle operating costs, whilst also improving the local environment.
The Mt Roskill extension to State Highway 20 (SH20) will be open for cyclists and pedestrians to have a look around before it is opened for all traffic.

It has long been a worthwhile project, delayed by a group that wanted to save the volcanic cones along the route, and latterly by the Greens, it cost NZ$201 million and will greatly speed travel between west Auckland (Avondale, New Lynn, Blockhouse Bay and Glen Eden), the airport and Manukau City. It also widens the section from Queenstown Road to Hillsborough Road to 3 lanes each way.

What is effectively now the South-Western Motorway will now run from Puhinui/Wiri in the south (where it currently terminates at Roscommon Road) to Owairaka. It will also mean both Dominion Road and Sandringham Road will be connected more directly to the airport, relieving Mt Albert Road of congestion and providing alternative routes from central Auckland to the airport.

The Greens opposed it, pushed for it to be delayed by the government (which it was, briefly), supported protecting the volcanoes and wanted a rail line instead. Keith Locke even claimed that "SH 20 is a waste of public money at a time when climate change, local air pollution and oil depletion will all be much worse by the time it is opened".

Give Labour credit, this is one project that your fuel taxes have been spent wisely on.

Judge for yourselves. The 4.5 km extension will start opening for road users between 15 May and early June.

Already under construction is the next phase of SH20, linking the southern end to the Southern Motorway, then there will be a fast, efficient route from west Auckland to the south.

Funnily enough, whilst there is debate about having a megacity for Auckland, Auckland City Council seems to have stuffed up its small related projects. The foot and cycle path is incomplete because of a 66% cost blowout, and Auckland City Council hasn't prioritised widening Tiverton and Wolverton Roads (which link the motorway to New Lynn) so those routes are likely to remain congested.

Auckland City appears far more interested in My Fair Lady than paying its share to complete roads linking to a new motorway. Having said that, the contract for the motorway was signed at $168.9 million and is finishing at $201 million - nice bit of contract management there :/

While the Mt. Albert by-election proceeds you might ask the Labour candidate (whoever that turns out to be, Labour doesn't seem to care) why it wants to spend $2.9 billion on the final section of this motorway entirely in a bored tunnel when it is a similar length to the section just completed for $201 million? Why is Mt. Albert special?
Anyway, more detail on the exact design of the motorway extension is here and the overall project.
Posted by Libertyscott at 6:07 pm

I spoke to Sir Barry Curtis a few years back about the roading issues in Auckland, and his comment was basically "well we've built all ours in Manukau but they come to a stop when they hit the ACC boundary."

So plus ca change by the sound of it

Insider: Yes Manukau does a better job at it than ACC, but still it built Te Irirangi Drive substandard as well.

All Auckland local roads should be split off into an arms length company, and there should be an end to funding arterial roads by rates.