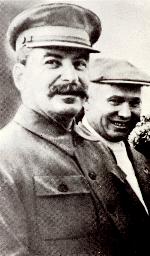 .
Today is the day that Khrushchev made his famous “secret speech” on the last day of the 20th Party Congress of the Communist Party of the Soviet Union in 1956, denouncing Stalin. The day that the human excrement called Stalinists were stunned, and either followed Khrushchev or refused and continued to follow their blood thirsty hero. Think about those who deny the crimes of Stalin's regime in the context of Holocaust denial today!
.
The speech rejected Stalin’s personality cult as being contrary to Marxism-Leninism (Mao, Hoxha, Kim Il Sung and Ceausescu all ignored this), it spoke of Stalin’s oppression and murder of Communist party members and innocent civilians, and the forcible deportation of nationalities or any groups Stalin feared.
.
Around 2.9 million were deported under the rule of Stalin, as he shifted populations around from borders or regions that he thought might just be disloyal. However, this is nothing compared to the culture of fear and mass murder, directly through executions and sending dissidents to Siberia to die in gulags, and indirectly through ruinous policies that starved millions. He ignored warnings of the coming Nazi Germany invasion, costing millions of military and civilians lives in the siege of Leningrad. He had policies such as summarily executing soldiers if they retreated without orders and terrorising the families of those who did. The hero status he gained from World War 2 was unearned – the cost of Stalin’s regime is estimated at around 20-30 million people.
.
Stalin was responsible for the invasion and occupation of Lithuania, Latvia and Estonia, the forced communisation of Poland, Hungary, Czechoslovakia, Romania and Bulgaria, and east Germany. He was responsible for the blockade of Berlin after the war, and for instituting communist rule in the northern half of Korea, putting Kim Il Sung into power and encouraging him to start the Korean War in 1950. He refused US offers of help to rebuild eastern Europe through the Marshal Plan, and because of the implementation of Stalinist economics, is responsible for eastern Europe today being a generation behind in GDP terms from western Europe.
.
He was one of the most avid warmongerers of the 20th century.
.
Stalin put enormous effort into making Soviet scientists develop nuclear weapons, as he was convinced of the inevitability of armed conflict with the west, Berlin and Korea were his two attempts. He strongly supported Mao Tse Tung, and rejected Tito of Yugoslavia, for taking a softer line by allowing small business and private property to exist.
.
Khrushchev repudiated the inevitability of armed conflict as he believed that the “superiority” of the Soviet system would win out over capitalism by example, and revolution would happen abroad because people would want it.
.
Khrushchev’s speech had two impacts:
.
- It destroyed the personality cult of Stalin in the USSR and most of its eastern European allies. Czechoslovakia even destroyed an enormous monument to Stalin in 1962 after pouring a fortune of national GDP into it. The level of repression eased, summary executions became less common, but the apparatus of Soviet terror remained; and
.
- It precipitated the Sino-Soviet split. Mao was close to Stalin and did not believe in peaceful co-existence and believe it was important to support revolution abroad, and to remain in conflict with the capitalist world. This split continued through till Gorbachev led the final years of the USSR. It saw border skirmishes between the USSR and China in the 1960s, China developing nuclear weapons on its own, aimed at the USSR and much endless rhetoric from China about the Soviet “revisionists”, and from the USSR about the Chinese “ultra-leftists”.
.
Of course, there was a time when Stalin was much loved in the West - Time magazine made Stalin man of the year twice (1939 and 1942)! The repudiation of Stalin also had one very convenient effect for communists – they blamed the extremes and repression on Stalin, not Lenin. This ignores the apparatus of terror and culture of murder and deportation that Lenin instigated. Lenin was no angel, he expanded labour camps and engaged in deportation and mass executions – but he is still the pinup boy of the left. The difference between Lenin and Stalin is one of scale, and it was natural that Stalin follow from Lenin.
.
Of course, Khrushchev did not mark the end of Soviet totalitarianism. The USSR suppressed the popular uprising against the Stalinist regime in Hungary in November 1956. Dissidents were still arrested, imprisoned and sometimes executed – simply the hysterical mass expulsions and extermination of groups had ended. He precipitated the Cuban Missile Crisis, and because he withdrew, was deposed, replaced by Brezhnev and placed under house arrest. The USSR until Gorbachev reformed it in the late 1980s was still a state of terror, where you dare not challenge the power or decisions of the Party, and where you didn’t complain or talk about things you shouldn’t.
.
Today is a day to remember how lucky we all are that the USSR is gone. Stalin was the 20th century's second most murderous tyrant (after Mao), Khrushchev was not averse to spilling blood, just less thoroughly and more selectively, we can be glad that Khrushchev took one bold step to pull the USSR out of the sheer hell of Stalinism, and place it one step better than that, but that is all.
Posted by Libertyscott at 12:00 pm

Fourth?
My life is complete