Kim Jong Il what a guy! 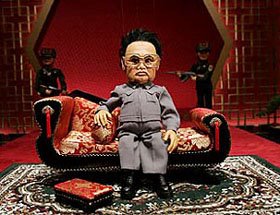 .
Happy 65th birthday Kim Jong Il (last Thursday) - General Secretary of the Worker's Party of Korea and Leader (not "dear" anymore) of the Democratic People's Republic of Korea. Not that he needs it, with his legions of teenage girls specially selected to provide him with carnal relief, and his obscene kleptocratic wealth.
.
Yes 65, not 64 as CNN claims. He is one of Vyatskoye's most successful sons - not Korea's. You see he was actually born in 1941 in the Soviet Union, and his birth year was altered in the mid 1970s so that it would coincide with his father Kim Il Sung’s birth year of 1912 so son would turn 40 and 50 and dad 70 and 80 in the same year.
.
CNN reports on his feats, such as having a photographic memory that he can recall everything everyone in a cemetery did (possibly because he put them there). Although there are stories galore in his biographies about him literally walking on water and other such feats
.
You can read more of the official North Korean version of Kim Jong Il’s exploits on the websites of the Korean Central News Agency and the DPRK publications. However it is far more fun to go to NK News, a searchable database of North Korean propaganda that includes a random insult generator and some fun searches of terms like “human scum” (which is used to describe anyone who fled North Korean from the gulags. You can see how vociferously nasty and funny North Korean propagandists are. My insult was:
.
"You anti-socialist beast, your accusation against the DPRK is no more than barking at the moon!" ahhh memories.
.
You can also look up New Zealand and see our own sycophantic scum licking the arse of this vile regime – although it could well only be Don Borrie (a man who has praised Kim Il Sung much as George Galloway has Saddam Hussein, and who thinks that there is a need to deal with historic hurt caused by our involvement in the Korean War!). Don't be surprised that Keith Locke cites Don here as a reliable source of news about North Korea, if it were 1938 I am sure Keith would be saying that it would be better to be nice to Mr Hitler.
.
The UK has its own nearly illiterate sycophants of scum at this blog and site. Human scum THEY are, but fortunately their blogs and message boards are so quiet you can see the tumbleweeds.
.
Did you know Whale Rider has been shown in North Korea?
.
North Korea congratulated Helen Clark on her election and Winston Peters on becoming Foreign Minister (as is the normal diplomatic protocol).
.
What I am waiting for is whatever gift that the New Zealand ambassador sends on Kim Jong Il's birthday, as is expected in Pyongyang.
.
Kim Jong Il recently visited China and said in his speech:
.
"Touring on this occasion various special economic zones making a great contribution to the socialist modernization drive with Chinese characteristics, we were more deeply moved by the Chinese people’s enterprising and persevering efforts and fruit borne by them.
In a word, our visit to the southern part convinced us once again that China has a rosier future thanks to the correct line and policies advanced by the Communist Party of China.
The astonishing changes that have taken place in the vast land of China have been possible because the CPC laid down a new line and policies that suit the specific conditions of the country"
.
Yes comrade it is called capitalism - it suits your country too, look south of the DMZ - it's not too late to try it yourself, make it your birthday goal next year Kim Jong Il - if you do, you might even deserve a birthday present.
.
By the way if you want one book to read about North Korea, it is Under The Loving Care Of The Fatherly Leader: North Korea And The Kim Dynasty by Bradley Martin (St. Martins (October, 2004)). Truly well researched and eye-opening insight, and I have read more books on North Korea than most.
Posted by Libertyscott at 3:11 pm

one of Vyatskoye's most successful sons - not Korea's.