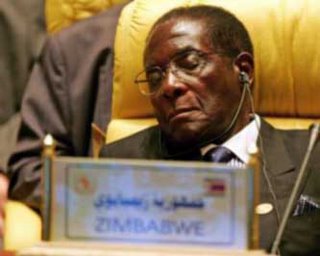 .
Following on from Kim Jong Il, Robert Mugabe has turned 82. May he never reach 83.
.
The government owned Zimbabwe Herald published a 16 page supplement congratulating him. A four day party is being held to celebrate it. You can read about it on the paper’s very slow website (you see there is no hard currency to pay for hosting it outside Zimbabwe).
.
The Zimbabwe Herald said:
.
“the whole nation joins the First Family in celebrating the life of the greatest hero ever to grace Zimbabwe and Africa.”
.
However, as reported by the Daily Telegraph:
.
“The National Oil Company of Zimbabwe, unable to import fuel for a year, said in its quarter-page birthday advertisement that it valued his "wisdom". The Zimbabwe National Water Authority, unable to supply clean drinking water to the capital Harare, congratulated his "legendary existence".”
.
The forced takeover of farms, destruction of homes, rigging of elections and jail and torture of dissidents in Zimbabwe is well known and does not need repeating here, simply read the report The starvation in a country that once exports food is another legacy of Mugabe.
.
However, one small reflection should be about those who supported him through the 80s and 90s – the ones who ignored the murderous record of ZANU, and who saw in Zimbabwe an optimistic “African democracy” – former ambassador Chris Laidlaw once wrote of this optimism, about a one-party state that was destroying property rights.
.
Meanwhile, may Mugabe be captured, tortured and killed sometime in the near future - he deserves nothing less, and may his flunkies run like the vile rats that they are. However, if you want a taste of day to day life in Zimbabwe, try the blog of journalist Peta Thornycroft, reporting for the Daily Telegraph.
Posted by Libertyscott at 12:59 pm