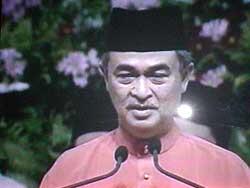 Malaysian Prime Minister Abdullah Badawi said so.
.
Indeed. We want an open and free debate and exchange of views - without violence, without threats against our citizens, and without threats to wipe Israel off the map. I haven't noticed Westerners using terrorism against Muslims - or indeed
.
He also said "Muslims for their part had to avoid "sweeping denunciation of Christians, Jews and the West". As my post a few days ago on the anti semitic cartoons, there is still some way to go on that one.
.
Mr Abdullah is a moderate - that's why he shut down a newspaper that now said it made an "editorial oversight" for publishing the cartoons, and he declared that possession of them was now banned.
.
That's the difference - so Malaysians, particularly the 40% who are NOT Muslim, here are the cartoons. Judge for yourselves - after all, they are not meant to offend you and I think you are all adult enough to make your own mind up.
Posted by Libertyscott at 1:56 pm

Hello. This is just to let you know that Liberty Scott has been added to the list of NZ blog links at longwhitecloud.org.nz.