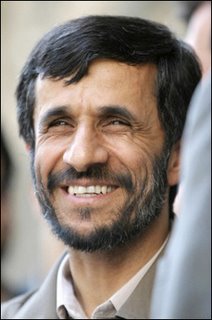 Well I was wrong- it seems the letter that Iranian President "I doubt the Holocaust happened" Ahmadinejad to US President George Bush was not diplomatic, it was the tirade of a madman.
.
Letters to improve relations are usually polite and generous, giving hope to the recipient that there is a genuine desire to negotiate about differences and live in harmony. Ahmadinejad has no such intent. According to Associated Press, besides slamming the US invasion of Iraq, he queries about the "truth of 9/11" (remember the hoards of conspiracy theories that claim the Bush Administration orchestrated it or that it was done by Jews to defame Islam) and then repeats his desire for Israel to be wiped out "how can this phenomenon be rationalised or explained?" he said.
..
Well, read your history books. It was a promise by the colonial power to the Jews and the United Nations agreed to set it up. Yes it almost certainly was a major mistake, but that is that.
.
He dismisses the Iranian nuclear programme as technological and scientific achievement by lumping it with others claiming "Why is it that any technological and scientific achievement reached in the Middle East region is translated into and portrayed as a 'threat to the Zionist [Israel] regime'? Is not scientific R&D [research and development] one of the basic rights of nations?" Yes it is, and you’re developing the means to destroy your near neighbour, because you don't believe it should exist.
.
However, the Pièce de résistance is his condemnation of liberalism and western style democracy as they "have not been able to help realize the ideals of humanity,"
.
"Today these two concepts have failed. Those with insight can already hear the sounds of the shattering and fall of the ideology and thoughts of the Liberal democratic systems," his letter read.
.
How is that any hope for peace? How can he even be close to reflecting reality? Liberal democracy has spread more than any other political system in the last twenty years, with most of eastern Europe, Latin America and increasingly more of Africa adopting it. It's very simple Mr Ahmadinejad, people have the right to choose who governs them - and not a special committee self-selected to weed out candidates that they don't approve of.
.
So Iran's peace pipe is to continue to question Israel's existence, refuses to allow inspections of its nuclear facilities to confirm it is not developing nuclear weapons and to hell with liberal democracy, separation of church and state, freedom of speech, freedom of religion.
.
Wonderful - so we're back to square one. Continue to make overtures to Iran and threaten sanctions, and be prepared for military action if Iran threatens to attack Israel.
.
Interestingly, Arab newspapers have condemned the letter. Saudi newspaper Asharq Alawat said that Iran is seeking to control the region:
.
"Tehran has made public its desire to lead. Iran seeks to control the region and the Middle East and become its policeman. This will lead to the breakdown of the peace process and the sabotaging of the Iraqi dream. We will witness a new arms race and will see governments being swallowed by organizations. It is sufficient to see who is standing by Tehran today to know what tomorrow will bring. " and "If Iran succeeds in its nuclear project, this will give the wrong message to other extremists."
.
The Arab Times of Kuwait states: "Iran by its outbursts has rubbed salt into this tense atmosphere by embarking on childish adventures and failing to come out of the revolutionary mode fearing it will bring to the surface its deficiencies."
.
As I have said before, the path to peace for Iran is simple:
- Open up nuclear facilities for inspection;
- Cease sponsoring terrorism;
- Cease sabre-rattling over Israel.
BBC on Ahmadinejad's letter
CNN on Ahmedinejad's letter
First part of Ahmedinejad's letter on Islamic Republic News Agency site (website claims to carry full text but doesn't)
Posted by Libertyscott at 10:15 am

guess that's when happens when we get too cocky..

thanks for posting the link, it wasn't available at the time.

Secondly: I don't feel like an idiot, the link was not available at the time I wrote the post days ago, I especially don't feel it when someone too gutless to post a name says it.