Given some of the news coverage you might think the US houses of Congress have reached agreement to cut spending in the US Federal Government.
The Daily Telegraph says there are US$1 trillion in spending cuts over 10 years.
The Washington Post called them "severe cuts".
Spendaholic Paul Krugman in the New York Times says it is "slashing government spending" and even says it calls the whole system of government into question!
The New York Times editorial calls it "nearly complete capitulation to the hostage-taking demands of Republican extremists"
You'd think I'd support it, but really it isn't what it seems.  Chris Edwards at the Cato Institute points this out in the following graph.   The US$917 billion "cut" over 10 years is not a cut in real or nominal terms, but a cut from a baseline of even faster increases.
So what does it actually mean? Well Edwards says:
"The federal government will still run a deficit of $1 trillion next year. This deal will “cut” the 2012 budget of $3.6 trillion by just $22 billion, or less than 1 percent." 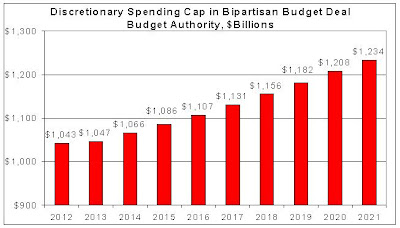 That's what is provoking a hysterical reaction among the left in the Democrat Party.  Spending isn't being cut in real terms, spending is being cut by part of the amount they wanted it to grow.
As I've mentioned before, a relatively unambitious plan from the Cato Institute would cut spending by US$1 trillion annually through to 2021, it would balance the budget by that year.  It would cut government spending as a proportion of GDP from a projected 24% to 18% (the same it was in 2000).  It would look like the graph below.   You can figure out the current plan is closer to Obama's plan than to the Cato plan.

However, because it plays with so much pork (everything from agricultural subsidies to Amtrak to public broadcasting to the Department of Education (don't worry the states do most of that anyway) to Medicaid, it would be difficult for many Republicans (who are frankly half responsible for the current mess) and virtually all Democrats to accept.
Yet it should be the bare minimum to get the USA back on track to growth, by pulling back from the crowding out of the private sector, by keeping taxes at their current level and eliminating vast amounts of distorting and damaging subsidies and government programmes.

Oh, by the way, Obama once opposed raising the debt ceiling as well:


"The fact that we are here today to debate raising America’s debt limit is a sign of leadership failure. It is a sign that the U.S. Government can’t pay its own bills. It is a sign that we now depend on ongoing financial assistance from foreign countries to finance our Government’s reckless fiscal policies. … Increasing America’s debt weakens us domestically and internationally. Leadership means that “the buck stops here.” Instead, Washington is shifting the burden of bad choices today onto the backs of our children and grandchildren. America has a debt problem and a failure of leadership. Americans deserve better."

Thanks to Allister Heath at City AM for tweeting this and National Review for publishing it.

Just another politician isn't he?
Posted by Libertyscott at 6:16 am

The only debt ceiling the US will actually accept is the one which will eventually be imposed by its creditors: when they will not lend the US any more money. Everything else is just flim-flam and posturing.