Do the Greens really back the demands of #schoolstrike4climate?

So on Friday the #schoolstrike4climate was held, whereby a bunch of hysterical school children demand that a Government, which is literally obsessed with mitigating climate change (even though the impacts of its measures are infinitesimal), should do MORE, NOW!

I don't want to bother with critiquing a bunch of kids, backed by environmentalist/leftist teachers (and the poor quality teacher protectionist racket), demanding public policy changes without the faintest clue of the consequences, but I do care about the Green Party - the main future coalition partner of the Labour Party, agreeing to all of its demands.  The kids aren't to blame, because the kids are being used by politicians and their supporters, because of the assumption that they'll get entirely positive media coverage and not be subject to criticism because... well... kids being political is meant to be a GOOD thing (imagine if kids were organised to go on a protest for something the Greens opposed though...) 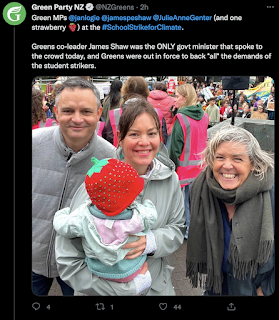 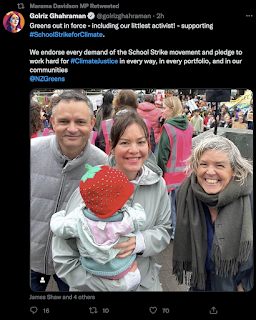 #schoolstrike4climate put out a press release, published on Scoop of their rambling demands:

(Taxpayers should apparently be forced to "invest in a just transition" to compensate farmers for this)
Then there is this
"agriculture isn’t the only thing we want to see changes in"  (I bet, you little meddlers)
In the words of one of our organisers, Charlotte Hoffman:
‘We need to start making big changes to transport, too. If the New Zealand Government is really serious about committing to a sustainable future, then they need to completely cut our transport emissions. Compared to other things, these changes are simple to make. Ban unnecessary air travel, invest in better public transport. If the Government wanted to, they would.’
So add:
So what of it?
The last demand is just silly, because this government is pouring unprecedented amounts of road user tax and general tax income into public transport. The latest National Land Transport Programme is spending $2.3 billion on public transport infrastructure, $2.6 billion on subsidising public transport services.  Sure it's NEVER enough for the kids, but this is the most benign of the demands.
The rest are absolutely destructive.
So the Greens want an end to synthetic fertiliser, want to halve the dairy industry and stop you flying on holiday, or to go to a conference (except perhaps a Green approved one).
This will make people poorer, make them less free and will make next to no difference to the impacts of climate change, except by making them LESS able to respond to it, LESS able to afford to adapt.
The posh kids don't know or understand any of this, but the Green Party which uses them, which facilitates them as tools to advance its agenda should know better.  It's an agenda of misanthropy, of degrowth and authoritarianism.
What epitomised it was an interview on Newstalk ZB on Friday between Heather du-Plessis-Allan (HDPA) and Izzy Cook, one of the organisers of the #schoolstrike4climate.  She's under 18, so let's be clear here, she is being put forward to represent this movement, with the support of the Greens, environmentalist groups, some of her teachers and presumably her parents, but the kitchen of politics can get hot - and she has learnt a humiliating lesson is what being an adult, engaging in political debate, is all about.
The peak was HDPA asking how the ban on unnecessary flights would be implemented.  HDPA asked if it was ok if she flew to a conference, Cook said no, it should be done by video.  Then HDPA asked about travel, paraphrased as follows:
HDPA: I'm planning to fly to Fiji on holiday should I be allowed to do that?
IC: No, you shouldn't.
HDPA: When did you last fly anywhere?
IC: A few months ago
HDPA: Where did you go?
IC: Fiji...
I can't imagine how awful Izzy Cook is feeling after that, but she will be buttressed by adults who will call HDPA a "fascist" and play on Cook's youth as being a shield that should defend her from being cross examined on a political issue.
However, this is so profoundly dishonest and cruel.  The Greens want 16 and 17yos to have the vote, ostensibly because the decisions made in Parliament affect them too, and they can have jobs, pay taxes etc. Many of these arguments could go down to 12yos etc etc. but of course the Greens wouldn't want them to have votes if they didn't think they could harvest power from it.  Have no doubt, the Greens think that its brand of dishing out other people's money with no conditions and solving the world through banning "what's bad", making compulsory "what's good" and endlessly trotting out and abusing words like "fairness" and "sharing power", will bamboozle plenty of kids brought up in an education system that is tilted towards promoting their ideological view of the world.
Furthermore the utter intolerance of this ideological view is what the kids are brought up on.  Greta Thunberg's "How Dare You", is THE response to simply questioning the effectiveness and impact of poorly thought out extreme ideas about destroying parts of the economy.  The kids are taught themselves to humiliate those who disagree with them with hyperbole like "why do you want the planet to die?".  After all, they're being taught that extinction is coming, armageddon is near, and that the people getting in the way just want to  "make profits at their expense".  This simplistic binary, us (good) vs. them (bad) is what fuels this hysteria, and it is largely invented in the minds of Green activists.
However they DON'T want the kids to be subject to the same scrutiny.  They want a mob of kids to be immune from criticism, advancing the policies THEY want.  Because it's a lot easier to risk one or two kids being cannon fodder to a critical journalist than to actually have James Shaw, Marama Davidson and the Green caucus confront voters with "you'll need a permit to book a flight somewhere".
The Greens are grooming a new generation of hypocritical climate scolds who want to destroy people's livelihoods, regulate how they live their lives and make food much much more expensive harming the poor.
So bear a moment of sympathy for Izzy Cook, she didn't expect to get scrutinised, to have her own personal hypocrisy highlighted on radio across the country, and she wasn't prepared. Nothing the activists who have groomed her mind prepared her for an alternative point of view, and the Green Party itself, eager to be a much more influential force on the next Government, used her and the other school kids to advance policies that, if subject to proper media scrutiny, would shrink the party's support close to the 5% threshold.
If you're going to advance political ideas that impose enormous costs on people, then you actually need to front up and propose them openly yourself James Shaw, Marama Davidson, Chloe Swarbrick et al.
Posted by Libertyscott at 7:31 pm

It could be argued the Greens are guilty of child abuse by putting up Izzy Cook as a proxy.

It's a disgrace, they are looking for the next Greta Thunberg, who, of course, is now outing herself as a commie.