What has been the biggest farce of the attempt to entrench an anti-privatisation clause in Three Waters legislation?

The attempt by the Greens to entrench their policies in Parliament is not necessarily surprising for a party that regards private property, enterprise and individuals with scepticism, but state property, state enterprise and public servants with benign intent.  Eugenie Sage is hardly the sharpest knife in the kitchen from the Green caucus either.

Jacinda Ardern's claim to be ignorant of the proposal is also farcical. On the one hand is seems difficult to believe that one of the country's most centralising governments doesn't have a handle on the detail of policy of one of its most controversial proposals. On the other hand, if she doesn't then why not?

What virtually NO-one in the media has asked (certainly not RNZ), is why the fear of privatising water?

You see it is precisely because of hysteria about water privatisation that New Zealand's fresh and waste water infrastructure was not substantively reformed (outside Auckland with Watercare Services) in the 1990s, and that hysteria was largely fuelled by the likes of the Greens in the form of the Alliance. The Alliance, along with the then "Water Pressure Group" (led by the completely loopy, and now late, Penny Bright) that painted a picture of doom and gloom from supplying water with user fees, in a commercial structure, that saw Auckland being the beginning and end of water reform.

It is thanks to muddled-headed Marxists like Eugenie Sage that water remained the most unreformed infrastructure sector, leaving it in the idealised world of "local democracy", "local empowerment" and of course largely staying far away from people paying for what they use, but rather taxing everyone so the biggest users of water (typically businesses) get subsidised by the smallest users (typically people living on their own). That's socialism for you.

Yet what does privatisation of water look like?  DIA's own report called "Transforming the system for delivering three waters services - The case for change and summary of proposals - June 2021" has a handy chart depicting the relative performance of ten English water companies, with government owned water companies in Northern Ireland and Scotland, and New Zealand council owned water providers. 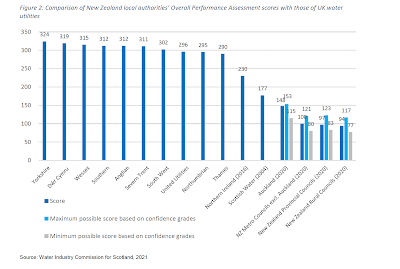 All of the private water companies outperform the others across a range of measures regarding customer service, and the conclusion of the report is:

• New Zealand has a long way to go, to catch up with the performance of more mature systems overseas

• We are at a starting position similar to Scottish Water, before the Scottish reforms. In the last two decades, Scottish Water has been able to close the performance gap and is now among the top-performing water services providers in the United Kingdom.

In other words, not only are private water companies in England performing better than the New Zealand council owned examples, but they have been outperforming Scottish Water - which has been the pin-up case study for the Ardern Government.

So let's be very clear.

Privatisation of water is not something to be scared of, in fact had it happened 30 years ago (not that it was even on the agenda) then there wouldn't be an infrastructure deficit in the billions for water.  Rates would be lower, yes you'd be paying a bill for water, but if it had followed the English model, there would be a water sector regulator capping the rate at which water prices could be increased, and ensuring that the natural monopoly water and sewerage companies had to meet key service standards.

Even the Government's own report acknowledges that it is PRIVATE water companies that perform well.

Why wont any Opposition MPs say there are benefits from letting the private sector take over?

Why do hysterical leftwing lightweights dominate this narrative and why do journalists never challenge it? (I mean it can't be because two of the major broadcasters are state owned can it?)

Posted by Libertyscott at 7:19 pm

Re your last comment, it probably isn't that, not when you look at all the other private sector MSM journalists, who are as left-wing as their state counterparts. They all easily swing from one branch to another, John Campbell being the leading example.

No, I'm afraid it's a combination of that, plus the "leading voices" in academia and politics that they constantly interview, plus the fact that the Rogernomics reforms, while having saved us from the fate of Zimbabwe and company, have not delivered in terms of productivity, with the accompanying steady rise in income vs cost-of-living. Yes, a lot of that is due to the rust-never-sleeps regulations of successive governments, plus the effective re-nationalisation of Air NZ and the endless sinkholes of Kiwirail and other government stuff that sucks money out of the private sector.

But the reality is that many ordinary people have not seen much success in recent years from the reforms, and what those reforms saved us from is a dim memory. And we're a center-left country to start with: Rogernomics was a bit of a fluke; the perfect combo of smart people who knew what they wanted to do and had a crisis as the reason to do it.

After that we just slipped back into our national comfort zone, which is why even businesses don't raise this matter and why the Left now dominate the conversation. Besides, they're also more on-guard and fanatical inside Labour to prevent it happening again - and you can't see National taking a lead on anything can you?

Haven't even heard ACT talk about privatising water, which is gutlessness on another level for a party that claims to be in favour of less government. I don't think the UK model is perfect, but it would make a huge difference if those who are meant to support capitalism actually would try