Cullen lost the plot, has Labour? 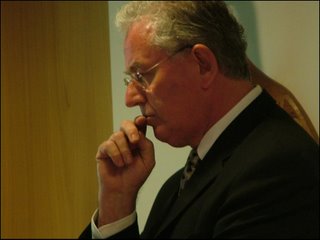 I actually have time for Michael Cullen - he's one of the brighter Cabinet Ministers, and frankly injects a great deal of sense at the Cabinet table. He has some understanding of economics and business, and has managed to avoid too much ridiculous spending by Ministers (seriously, if you think it's bad now, it doesn't bear thinking about). Cullen challenged Clark for the Labour leadership almost 10 years ago, and since then has been the rightwing business oriented Deputy Leader to the leftwing social activist Clark. He has made major screwups, failing to agree to Air New Zealand's request for Singapore Airlines to buy 49% of it is one, but he also has been the one person in Cabinet who has said no to more government more often than yes. One reason government spending on roads has gone up so much is because Cullen believes roads are a better investment than spending on the bottomless pit of health. Now, please recognise my compliments are in the context of the Labour Government, which I hardly endorse. He's the best of a bunch that I almost always disagree with.
.
However, I think the wheels are seriously coming off of the well oiled machine that Clark and Heather Simpson, and Cullen have managed well for the last seven to eight years. Michael Cullen's attack on the Press Gallery by claiming that calls for tax cuts come from journalists on the Press Gallery who will benefit from it is utter nonsense. Guyon Espiner is no neo-liberal Austrian economist, and with the exception of one L.Perigo, New Zealand parliamentary correspondents are hardly great friends of capitalism and less government. The latest One News Colmar Brunton Poll puts National on 47% and Labour on 38% - the public wants tax cuts, and the Bludging for Families package doesn't wash, people don't want welfare, they want their own money back.
.
While I could ask Michael to say no more to his colleagues and cut taxes, the reality is that a social-democratic centre-left Labour government will increase spending rather than cut taxes. That is what it is all about, that is a Clark led Labour government is about increasing what the state does, not shrinking it.
.
The difference is that the New Zealand public is increasingly rejecting that, they believe the state takes too much. Matt Robson might buy the argument that foreign owned media are controlling the debate, but last time I looked, TVNZ shares are held by the Minister of Finance. The Labour government is unwinding, and National just has to be a coherent and believable alternative. Is it?
.
Footnote: In March, Libertarianz had 0.2% support in the Colmar Brunton poll, more than Jim Anderton's Progressive Party... admittedly that means 2 people said Libertarianz!
Posted by Libertyscott at 10:00 pm