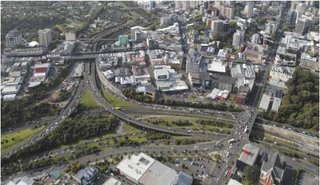 Various journalists HAVE published in the morning papers about how this region and that region are about to get certain roads built in the coming financial year because Land Transport NZ - the government's land transport funding body - has just released its National Land Transport Programme. Invariably they will get things rather wrong.
.
So here it is:
.

Now compared to other countries where politicians decide ever project that gets funded, this system is a vast improvement - but with the Crown money being inserted, specifically to go to specific regions, with Ministers saying what that money is expected to fund, this is getting a bit blurred. The Greens will say that road building is pointless and the roads will be empty soon - noticed that happening have you? Labour will think this enormous spend up is fulfilling all everyone ever wanted.

So will the National Party or ACT criticise the politicisation of funding? Maybe they will criticise the end of benefit/cost ratios as the determining factor for funding projects (it is now only one factor). Maybe they will suggest it would be better if the highways at least were run by the private sector, as is starting to happen in the US, with a direct relationship between what road users pay and what they get in service, or maybe they'll just moan that certain porkbarrel roads they think are important aren't getting funded quickly enough. *snort*

Get the National Land Transport Programme in full or for regions here.

Get Transit's State Highway Plan for the next year here.

UPDATE 1: I am disappointed again at the shoddy journalism. For starters:

and "Auckland's roads are to get 26.7 per cent – or a $558.7 million cut." Really? Given that this figure comes from a table that includes $146.9 million for passenger transport (and lesser amounts for other non road activities) it is more like $400 million - in fact had you taken 30 seconds to read up the table, you'd have SEEN that figure. The NZ Herald makes the same stupid mistake.

and "A significant amount of funding will be spent on projects including the Manukau Harbour Crossing " Actually no money for that has been approved, and what has been indicated that MAY be approved, is a tiddling $17.4 million on investigation and design - not construction.

and "At least $33.46 million has been put aside for construction of new state highways, which will include helping to build the Transmission Gully motorway. " She means for Wellington, and she means upgrades not NEW state highways, and no - virtually nothing about construction for Transmission Gully, but around $10 million MAY be approved for investigation. Not construction, unless you count the $400,000 for finishing the long approved tree planting along the route to contain runoff. Sorry Rebecca, nothing dramatic there.

So where did this all come from? Easy. Reporters (not fucking journalists - journalists do more than parrot what others say) have taken, for example, this statement:

"A particular focus is on high priority Auckland projects such as the SH20 Manukau Harbour Crossing which is part of the strategic Western Ring Route."

and said instead that "A significant amount will be spent on projects including the Manukau Harbour Crossing ".

None of them understand that this is an indicative programme and actual funding is decided on a case by case basis. Wellington's Inner City Bypass was in the programme for three years, before it actually got funding, so was the ALPURT B2 motorway bypass of Orewa. The Manukau Extension of SH20 had funding approved two years ago and has yet to have a sod turned on it. Why? Don't ask me - get one of the "journalists" to ask these questions. You rely on them so much else information, tell me now that you trust them.

Posted by Libertyscott at 6:34 pm