How Green is the market 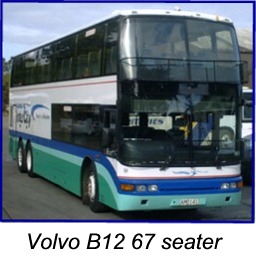 Well high fuel prices have done something that the Greens can't achieve with their interventionist nanny statism - it has seen a shift to public transport.
.
The Dominion Post reports that Intercity Coachlines has ordered four new double decker coaches to provide more capacity on its Wellington-Auckland coach service. The coaches will carry between 65 and 76 passengers, 30% more than standard coaches, while using 15% less fuel. It seems that demand for long distance coach services is rising because it is becoming more expensive to drive. So the more fuel efficient coaches are now cheap enough, compared to driving, to be more competitive for more people.
.
This is great, and a gamble. After all, coaches have an efficient life of no more than 15 years, so it is a reasonable capital commitment by a private company to buy new larger coaches. On top of that, the coach bodies will be built by a Tauranga company - and there is no protectionism making it more expensive to import bus bodies.
.
Don't forget Intercity was once government owned. It was the long distance part of the former Railways Road Services that the fourth Labour government privatised as part of its deal with SOE New Zealand Rail Ltd to wipe its $1 billion of restructuring debt which it had built up over the seven years since it had previously had its debt wiped. Railways Road Services used to have over $1 million in subsidies (in 1990 dollars) a year, now Intercity runs it as a commercial operation and business is growing.
.
Now the Greens might complain that the trains aren't getting the same investment - well maybe people aren't catching trains in sufficient numbers to make it worthwhile?
Posted by Libertyscott at 5:27 pm