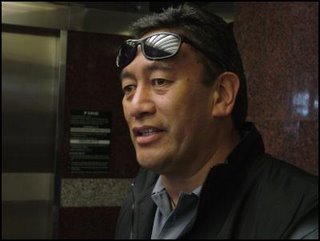 Stuff reports that Helen Clark couldn't wait to deplore the tragic Israeli attack on the UN peacekeeping post, but Keith Locke quite rightly has pointed out "I'm a little concerned that the prime minister on one hand says that Hizbollah should stop its attack, yet she only asks Israel to cease its disproportionate violence." She also said "Government statements have been very carefully balanced to condemn violence on both sides. Two wrongs never make a right and we would like a ceasefire now". Oh, so that means if you are attacked, then sue for peace - when Germany attacked Poland, Britain should just have said "no Mr Hitler we'll negotiate". THIS is the defence policy of this government "two wrongs never make a right"!
.
Don Brash has called for peace and correctly said "Tragically, there appears little prospect of lasting peace in the Middle East until all parties recognise the right of Israel to exist." Indeed, something Hizbullah, Hamas, the Palestinian government, Syria and Iran don't accept.
.
Peter Brown from Winston First endorses Clark's comments "100 %". Gee the brainbox handle was being cranked quickly for that one. I thought Whingers First would approve of foreigners killing each other if it reduced the risk that they may immigrate.
.
Rodney Hide refreshingly said "I ask New Zealanders, and this Parliament, to consider what would be New Zealand's response if we had to confront a neighbour right on our borders who had committed such atrocities, and whether we would stand idly by and talk about a proportionate response". Yes exactly.
.
However, Hone Harawira said, in Maori "The violence perpetrated by the Jews must stop".
.
Pardon me? For starters, Hizbullah started this tit for tat. He doesn't mention the terrorists at all, you'd think Hizbullah was sitting back taking it and had done nothing to provoke this. More disturbingly is his view that it isn't Israel, but it is "perpetrated by the Jews". "The Jews" live around the world, quite a few live in New Zealand. This is the sort of sneering collective accusation language that you'd see in Nazi Germany in the 1930s - one sided - not even denying that Hizbullah is to blame, but as if Hizbullah is doing nothing, as if Lebanon is just some peaceful country with no foreign backed terrorists attacking Israel. Blanking out one side's culpability completely.
.
So what does Harawira think of "the Jews"? and is this a surprise, given he is an MP from an avowedly racist party?
Posted by Libertyscott at 7:22 pm

I am neither Jew, nor Muslim,
Neither Racist, Nor Socialist..

Your views on the above topic are typically one-sided. It is important to have an opinion, and it is equally important not to sit on the fence.

I agree that Hisbullah and Hamas are not completely the oppressed mass they claim to be...

However, to ignore the crimes of the Israeli army in its illegal occupation when forming your opinion is wholly unjust.

Next time someone comes to your house, and bulldoses it, along with all your infrastructure, schools, hospitals, places of worship, killing several members of your family,sometimes several generations, write a blog and then tell the world how you feel.

You can say all you like from your comfy little desktop PC, but do you honestly think you wouldn't feel any hatred? Wouldn't want revenge? Wouldn't want to find out why?!?

I have spoken to some Rabbis...you know...the ones that get attacked by Israeli extremists...and they are physically in tears from what the Israeli government is doing to these wastly innocent people.

Do some research and open your mind...just because its Jewish, doesnt make it eternally right! Same goes for Islam, Christianity , Atheism etc.

Open your mind..All the government has to do is give back the land it occupied illegally. You wouldn't hear much from Hamas after that.