Want to bludge an upgrade? (of course you do) 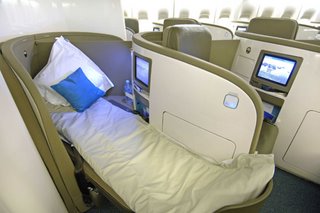 *
Dates with poor business class sales: Midweek and Saturdays are less likely to have business travellers, and Sunday morning departures as well. However it is route dependent. Plenty leave on a Saturday to get to Europe on Sunday for a meeting on Monday. Few businesspeople fly midweek to Europe because they would arrive at the destination on the weekend or Friday.
*
Be willing to move seats when asked: If the airline calls you at the gate and offers to change seats (probably so a couple can sit together or to sell another seat in your class), there is a chance the new seat you are offered is an upgrade.
*
The fare you pay: The cheaper the fare you paid the less likely you’ll be upgraded. Full fare economy passengers are more likely to be moved first, because they are more valuable customers. “smart saver” or “super saver” fares will be last chosen. If there is a small difference between the bottom fare and the next one up, it may be worth choosing, especially if you get more frequent flyer points.
*
Airline policy: Airlines have different policies and it is difficult to glean what they are. Assuming you aren’t ruled out by one of the points above, one article I read suggests the following:
*
Qantas and Singapore Airlines do not respond to upgrade requests and upgrade spontaneously only when absolutely necessary (frequent flyers have preference).
*
Thai, United and American Airlines tend to respond to upgrade requests positively if there are spare seats, but preference given to their own frequent flyers with status, and then partner airline frequent flyers with status.
*
BA, BMI and Lufthansa tend to respond to upgrade requests only if the passenger is in economy, and it is overbooked and you are a frequent flyer with status. Partner airlines' frequent flyer status comes next.
*
Genuine complaint: If the airline has screwed something up (don’t lie about this) and you have a genuine complaint, you are more likely to get upgraded if there is a seat available. My girlfriend did this on a recent flight from LA to London, and got bumped up to premium economy because the checkin staff were rude, denying something that had previously been agreed with the airline over the phone. You can’t plan this, and you probably don’t think yourself lucky if there is a balls up by the airline. This will be done to assuage you, but it wont be done if you demand an upgrade in compensation. It is more likely if you are polite, humble and explain what happened and why you are unhappy, and be grateful for the gate or lounge staff for listening.
*
Even if you can tick all of the above, you still are, most of the time, going to miss out. Either some have “paid” for upgrades with vouchers or airpoints, or business class is sold out. Just because it looks empty when you walk, doesn’t mean it is – many business class passengers sit in the lounge and get called for the flight as the final call, so they get on last.
*
Remember, most of this advice is the hard way of getting a seat up front on the plane. The easy ways still are:
*
1. Buy a business class ticket;
2. Use frequent flyer points/upgrade vouchers to request an upgrade (the airline has given you these as a reward for loyalty).
*
An alternative is to try premium economy, it is between 20% and 50% more than economy class, and gives you about half a foot more legroom, double the recline and a bit more service. It isn’t business class, but is a relief from the cattle class down the back. Air NZ is the only airline flying to NZ which has premium economy, but BA and Virgin (which fly to Australia and the US) both have it as well.
*
You might not feel it when you fly down the back on a long haul flight, but most airlines make little money from economy class passengers. In fact, if there are no first/business/premium economy passengers, your economy class fare would probably be about 50%-100% more than it is, or the plane wouldn’t be able to fly. So don’t sneer at those who personally or through work have paid 3 or 4 times what you have for their tickets – they are, in effect, subsidising your flight.

Posted by Libertyscott at 4:15 am

Fabulous article - thorough and well presented. A must read for any frequent traveller.

Thanks for the article. I agree, the easiest way to score an upgrade is to burn points, which I did recently. I never want to experience cattle class again!