Nicky Hager's book, which of course like the healthcare, housing, education, incomes, public transport and much else of what Hager wants from government, should be free.

Kim Dot Com should be letting one of his "customers" copy it and spread it widely amongst the public if he was true to his belief in "freedom".

However, my first reaction was to notice how Russel Norman, who like the Green Party more generally, escapes a lot of serious scrutiny, bleating on about "negative attack politics" 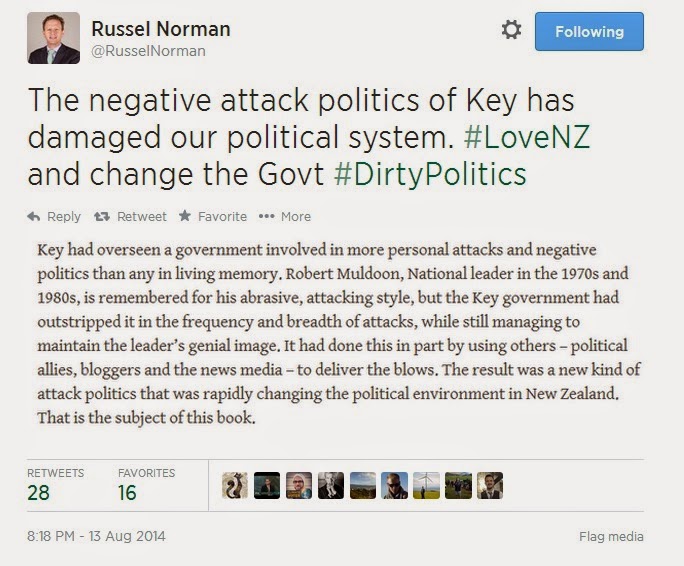 The same Russel Norman who once decided to engage in name calling against me on the Green's Frogblog, as a response to my criticism of the scaremongering over EMR from cellphone towers, yet no such scaremongering over radio broadcast towers.  I wrote about it here.   It's hardly a big deal, but this is how politics is.

You see, attack politics are actually normal.  It's the norm for many politicians to be pejorative.  The left's primary pejoratives are to claim policies are "racist" and "sexist", or that those on the right "hate the poor" and are only in politics for the money (they of course, donate most of their salaries to charity), and finally there is the anti-semitic attacks on John Key and the childish "fuck John Key" contribution to intelligent discourse.

What is apparent is anger.  Anger from those who think they are entitled to spend other people's money without their consent, anger from those who want to tell other people what to do with their property, anger from those who don't like foreigners, or foreigners buying things they themselves can't or wont buy, and conversely anger from those who are fed up with being told they owe others a living, fed up with being told that some people are entitled to be listened to more, because of some aspect of their background.   The anger in politics is due to polarisation.  Those on the right are becoming more clearly cynical of answers that involve more government, while those on the left are less inclined to compromise with business, with those arguing to be left alone, and those who offend and upset them.

People are angry because most of them don't understand a lot about the complexities of modern economics or societies, and want simple answers, they also want politicians who will pander to their own prejudices about why things are as they are.  Conspiracies attract the feeble minded, and those who think governments have all the answers to block individuals doing things they don't like, don't like people saying no.

The real answer is that politics do not provide good answers for most problems in the world, but human initiative does.  By releasing people's ability to create, produce, organise themselves and to build, share and help each other, there are ways of resolving problems.  Government's don't do that, they use force.  Hager embraces the use of force, and is rather upset at there being a government that doesn't do it enough to the right people.

Hager's book from what little has percolated out simply seems to report that some bloggers are affiliated with the National Party.  Who knew?!?  Hager wont write a book about those affiliated with the Labour Party, or the Greens, or heaven-forbid the Kim Dotcom/Alliance Revival/Harawira Whanau First Party, because they are who he wants to have in power.  He talks about how bloggers deliberately try to get media attention to support one political point of view, yet he is guilty of exactly the same tactic when he puts out his books.

Hager's biggest problem is that what he purports others to do, is exactly what he is trying to do himself.  Pass himself off as "independent" and dedicated to exposing secret political deals, but he is anything but independent, and completely ignores anything going on on his side.
Posted by Libertyscott at 9:01 am

With regard to Hagar's latest, I'm reminded of that lovely old song:-

Is that all there is, my fiend?

If any of that email traffic passed through the US, it's an extraterritorial violation of the USA PATRIOT Act. That's where you end up sharing a cage in Guantanamo Bay with Mr Dotcom.

So the real question is: will the NZ Police arrest Hagar, Potton & McCarten and remand them in custody?