Extinction Rebellion is a club of self-congratulating sociopaths

The passive aggressive militant wing of the Green Party - Extinction Rebellion (XR) - is looking to disrupt Wellington... yes Wellington... in the next few days, to make its latest "point" that nobody is taking climate change sufficiently seriously.

However, it is literally impossible to appease this group of sociopaths, who follow on from the British equivalent that has been generating a lot of news, because of their passive aggressive blocking of major roads, stopping people going about their lawful business and generating MORE emissions due to the queues and idling of vehicles as a result of their aggression.

You see XR isn't a protest group intended to win public opinion, or change public policy, it exists to disrupt and it exists to generate mayhem.  IR isn't, of course, a terrorist group, because it doesn't intend to kill and destroy property, but it DOES act in ways that may consequentially result in people's death and it harms their property.  UK IR founder, Roger Hallam admitted several weeks ago that he would block an ambulance carrying a dying patient, without blinking.  This is full-scale sociopathic misanthropic behaviour.  But why?

In 2019, IR stopped Wellington, extensively disrupting its main bus corridor.  Buses...  XR demands at the time were reported as follows by the NZ Herald:

Activists want them to "tell the truth" by declaring a climate emergency, to act and halt biodiversity loss and reduce greenhouse gas emissions, and to create and be led by decisions of a Citizens' Assembly on climate and ecological justice.

So the first has happened, the govt launched a bioversity strategy in 2020, it has a draft Emissions Reduction Plan (which is unnecessary, but still fits into XR's political persuasion) and the only thing that hasn't been done is to set up a "Citizens' Assembly on climate and ecological justice" (which XR, of course, would want to dominate).  New Zealand HAS a citizen's assembly, it's called Parliament, and it elected a majority Labour Government, supported by the Green Party, that buys into XR's philosophy and agenda.

So is XR satisfied? Of course not.  You see it isn't interested in public policy or even using the tools of a liberal democracy to convince people of the merits of their argument.  It's something else perhaps ... 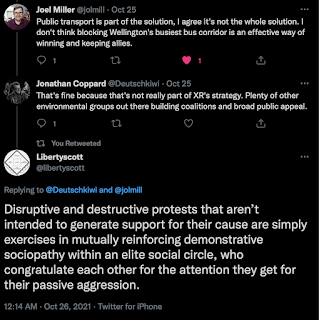 It's a club, it's a social club for angry sociopathic misanthropes, whose hatred for other human beings, their choices and their priorities is absolutely palpable. They don't care what their impact is on others, they have just given up on the processes of a free society of using free speech and the processes of parliamentary democracy to convince the public and decision makers of whatever merits their positions hold. For they have no serious demands, after all when politicians essentially meet their demands, they create new ones, it's endless, because it's not about politics, public policy or even the public. It is about them.

The members join this organisation in part to support a cause, but what they find is a community of like minded people, who share disdain for the general public, for mainstream politics, and they are bound in their misanthropy and their thrill from planning ever more disruptive and extreme activities to bond themselves to each other.  This explains how the Insulate Britain (XR by another name) mob have taken to gluing themselves to the road, which is going from misanthopy to masochism.  It's not rational to do this in relationship to promoting a cause, except by the acclaim it generates within their social circle and associated organisations, like Greenpeace and the Green Party itself. Some members of the public may support their cause, but many will despise them, which they love - for it mirrors what they think of the public.

The media attention they get is gold, because it means they get recognised within their own club and associated like-minded more moderate clubs. That gains social status, for the reward of that is worth it for them.

You see political and protest groups are social clubs which give members esteem for being more and more staunch and attention seeking. It's what binds radical political organisations that are outside mainstream thought, like communists, fascists, nationalists, religious zealots and the like - and XR IS a group of this-worldly-religious new age misanthropic zealots. Take this from the XR Wellington website:

we condemn racism, and advocate for the impoverished and the non-violation of Papatūānuku. We are people who belong to the Great Pacific Ocean.

Treating the planet as a God, to not be violated and believing they are owned by an ocean is just loopy new age bullshit.  Then ...

We are agitating that there is a return to the etiquette and lore established by the forebears pertaining to our obligations bestowed on us by a greater power. We encourage unified community, folk, and national undertakings.

Only comfortably off, elite, middle-class new age purveyors of mysticism could swallow this quasi-religious nonsense, with a suffix of collectivist hippy talk.

Loving kindness to all life and life systems is paramount, it is just that we devote time to mourn the loss of our siblings, of nations, of all life. From utter grief proper action will emerge to truly remedy our condition.

Loving kindness except to human beings peacefully going about their lives, making a living, engaging with family, friends and others. Do they mourn all life? Including the thousands of microbes and tiny insects they kill daily with their bodies? Is this grief just an exercise in reinforced group onanism?

But then the truth comes out...

Disregard and omit accusing and belittling one another, because the real blemish on Papatūānuku’s bountiful countenance is humanity and his exploitation and corruption. We are on a course of discovering and exercising how to ameliorate this affliction, whilst we rectify and perfect the canon of human regulation.

Don't be rude, because we hate humanity using the planet to survive, which is an "affliction". Never fear, they are going to "perfect human regulation".  Where have we heard that before?  Methinks they want a Year Zero.

These are sociopaths, they deserve to be ridiculed, laughed at and scorned for their sociopathy. It is a club of well off misanthropes who get pleasure from distressing others, harming them and getting publicity for their extremism.

So if you see any, just laugh at them, but if they get in your way, recognise it isn't peaceful, it is passive aggression - it is a form of violence to block people's freedom of movement.

This is what they deserve.... just move them out of the way and get on with life...

oh and don't vote Green, because the entire philosophy of XR is just the Green Party philosophy writ large.

Posted by Libertyscott at 11:41 pm

Life, liberty and the pursuit of happiness. Politics, philosophy and economics from a pro-capitalist, libertarian, objectivist perspective. Born in New Zealand, lived in the UK, back in NZ career has been in infrastructure policy.