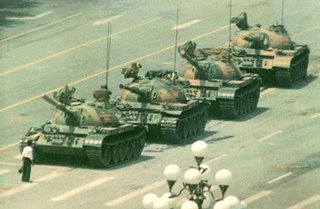 One piece of history I have neglected to comment on is Tiananmen Square. Not PC has a great review of commemorations worldwide and commentary. Of course I do remember is, it’s hard to forget – it happened on my birthday. I remember seeing the coverage on television, I was a student at the time. I have always wondered if I had been a Chinese student in Beijing whether I would have been there, whether I would have survived and how I’d feel now about it.
.
The USSR and eastern Europe were in the throes of optimism due to glasnost and perestroika. Freedom of speech and the ability to criticise government was becoming the norm in the “second world” (communist bloc), and Mikhail Gorbachev had come to visit China. This was part of a successful effort to normalise relations between China and the USSR, after over 30 years of Cold War enmity after Khrushchev criticised Stalin, and Mao became the leader of the completely mad murderous Marxist-Leninists of the world (the USSR wasn’t mad, just murderous to a lesser degree after Stalin).
.
The death of reformist former Secretary General of the Communist Party, Hu Yaobang prompted the demonstrations. He died on Kim Il Sung’s birthday 15 April 1989, and had called for rapid reform, condemning the excesses of the Maoist era. The protests initially were motivated by mourning for Hu Yaobang, who had been stripped of his title two years previously for not cracking down on other student protests. The protestors called for political reform, the addressing of corruption and more openness and transparency in government. A split in the Communist Party leadership saw General Secretary Zhao Ziyang support a soft approach, and Premier Li Peng a hardline. Eventually martial law was declared on 20 May and in the early hours of 4 June, the 27th and 38th armies of the People’s Liberation Army (commanded by President Yang Shangkun, unlike earlier units which were locally based and not inspired to attack those who could include family) turned on the people. Between 2,000 and 3,000 were killed, and the state media in China called it an “anti-government riot”.
.
China’s state media is widely considered to have been a mouthpiece for the communist party, but at least one outlet had reason to be proud, before the individuals concerned were themselves arrested. Radio Beijing’s English language service (China’s international shortwave radio station) broadcast the following message:
.
"Please remember June the Third, 1989. The most tragic event happened in
the Chinese Capital, Beijing. Thousands of people, most of them innocent
civilians, were killed by fully-armed soldiers when they forced their way
into city. Among the killed are our colleagues at Radio Beijing. The
soldiers were riding on armored vehicles and used machine guns against
thousands of local residents and students who tried to block their way.
When the army conveys made the breakthrough, soldiers continued to spray
their bullets indiscriminately at crowds in the street. Eyewitnesses say
some armored vehicles even crushed foot soldiers who hesitated in front of
the resisting civilians. [The] Radio Beijing English Department deeply
mourns those who died in the tragic incident and appeals to all its
listeners to join our protest for the gross violation of human rights and
the most barbarous suppression of the people.”
.
Radio Beijing’s name changed a few years later to China Radio International. Unfortunately, China Radio International is today a disgrace – it whitewashes the murder carried out against its own staff. It broadcasts a lot of news and interesting cultural programmes, has cooking shows and other programmes that are quite good - but is also a propaganda engine par excellence. What is telling is what it doesn’t discuss, it rarely broadcasts the sort of blatant ideological invectives that characterised it during the Maoist era. However, try it out yourself.
.
You can still listen to it in English around the world on shortwave and the internet. It’s website is here, and it broadcasts to New Zealand with strong signals in English on shortwave between 9-11pm and then again after 1am, but you can also hear it online. This is the worldwide shortwave broadcast schedule (turn off your computer before listening, and put the radio near a window with the aerial fully extended) and the website audio feed.
.
The Tiananmen Square massacre will always be remembered, the current Communist Party leadership can't destroy the photos, videos, audio, transcripts and other reports of what happened. All they do is persuade Google to censor the images for them, which you can get here. More recently a documentary on BBC4 has sought to find the man who stood in front of the tank in the famous footage clip seen above. The conclusion was, nobody can confirm what has happened to him or what his name was, despite the claims on wikipedia.
Posted by Libertyscott at 8:38 am