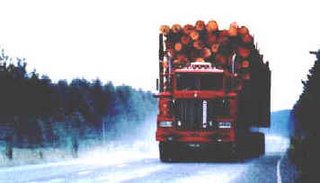 Green MP Russel Norman claims that the government is subsidising the country’s trade deficit because he claims road transport is subsidised ahead of other modes. His theory is that rail is always more fuel efficient than road, so by definition the more road freight the more money spent on fuel, hence a greater trade deficit.
.
Now first it is wrong, as it ignores whether the road freight is generating exports that would not have otherwise occurred. It totally ignores the output of transport (facilitating trade in both directions), and Russel has no figures to argue this either way.
.
However, his main use of figures is to cite two reports to support this, unfortunately both have figures that are slightly dated, and one of the reports he has used very selectively indeed.
.
For starters he claims that “road freight transport is the most energy intensive mode of transport consuming four times as much energy for each tonne of freight per kilometre compared to rail; and nine times as much energy as coastal shipping (according to a 2000 Energy Efficiency and Conservation Authority report).”. Well, the “four times” figure was a comparison made in 1981 (and truck efficiency has increased more than rail efficiency). Railways ran a test comparing a train with a truck moving the same weight of goods between Auckland and Wellington - this was part of its justification for the government continuing to cover its mounting annual losses and to argue against deregulation of freight transport (at the time trucks were legally prohibited from hauling most goods greater than 150km). Since then technology has moved on, particularly for road transport. When comparing long haul bulk/containerised freight today, road uses about 2.5 times more energy than rail. However, note the proviso – long haul bulk/containerised freight. Most freight trips are short to medium, and involve less than wagon loads of freight. Rail is generally no more efficient for trips of less than 150kms (i.e. Auckland to Tauranga, Wellington to Wanganui), and certainly never efficient for moving less than wagon load (a wagon being a modern one which has the capacity of a large truck not the old little 4-wheel ones) of freight.
.
Secondly he claims “a 2005 Ministry of Transport study showed that truck users pay only 56% of the costs they impose on society while rail freight users pay 82%”. Now this study covered data for the 2001 year, since then the government has committed $200 million to subsidise rail infrastructure for freight. However, more importantly Norman hasn’t burrowed down to see what these so called “costs” are.
.
Strictly financial costs (costs that government actually pays directly – roads, police, administration) see trucks producing a surplus of $45.6 million (from Road User Charges, although this is reinvested in upgrading the road network). Beyond that though, the costs Russel is concerned about are monetised costs for air pollution, accidents, climate change and noise. Now air pollution is largely a factor of particulates, and the amount of sulphur in diesel (which is the source of most particulates) has been reduced by two-thirds since the study (as the Marsden Point refinery is getting upgraded). It is about to be reduced by another 90%, so in fact this is changing. The figures for air pollution should be different now and about to be even more different.
.
It is also not a monetised cost – the cost is from health expenses, which are notoriously difficult to attribute to “trucks”. The accident costs are largely born by the private sector (damage to property, time etc), and the ACC no fault system that we have for personal injury by accident means that it is difficult to attribute costs to those who actually cause the accidents. Most trucks are not involved in serious accidents. The climate change cost is only relevant in terms of meeting Kyoto Protocol obligations, so is not a cost independent of government decisions, and noise – well that is factored into property prices. What is ignored are positive externalities, like increases in commercial land value for truck access, and the spinoffs for business in having transport for inputs and outputs of production. Never mind, no other sector covers any of these either.
.
So this simple comparison is not so simple at all.
.
Russel ignores other parts of the report that don’t suit his “world view”. One is the detailed case studies into long haul freight, which actually looked at the marginal cost of shifting freight between rail and road on three routes. Table 3.6 of the main report indicates that moving freight between Auckland and Wellington, the marginal cost of rail is HIGHER on environmental grounds than road. It is the same between Napier and Gisborne, but a quarter between Kinleith and Tauranga. Kinleith to Tauranga by rail is, of course, through a tunnel, whereas the road is over the Kaimai ranges. The results, in other words are not so black and white.
.
What other results he wont like from the same study are:
.
1. Rail passengers pay only 35% of the total cost of providing Auckland suburban passenger train services. In Wellington it is 56%. (page 57 of the report)

2. The roads that recover the least of their operating costs are rural local roads (page 50). Urban state highways recover the most (hardly a surprise that the busiest roads generate the most revenue). Railways aren’t going to be an alternative for lightly trafficked rural local roads. The problem with local roads is that they are rates funded, which carries its own inequities.

3. The environmental impact of buses in cities is around 18.2 times that of cars. This means a bus should ideally be replacing 18 cars, to break even with cars on pollution. (page 64)

4. For trucks “Current charges (mainly RUC) are in most cases greater than the level of marginal provider/external costs (principally accident externalities and marginal road wear).” (page 107)

5. For freight comparisons between road and rail “For the primarily rural movements analysed, the environmental impact costs are similar in magnitude by the two modes.” (page 107)

6. On Auckland and Wellington passenger trains and buses “If charges were to be set to cover only the marginal costs in both periods, then peak charges (fares) would broadly double, while off-peak fares would reduce by half or more.” (page 106)
.
The Greens are good at selectively using facts. I have just done the same, and there are some important points about transport in the report, but it does not simply say "trains good trucks bad". The study needs updating, as subsidies for rail have increased markedly, and charges for road use (and money for roads) have also increased (while a major source of pollution has been reduced). Now there are problems with road transport, for starters ratepayers shouldn’t be paying for local roads – that should come from road users. In addition, congestion in cities should be managed by charging being higher at peak times and lower at other times - but that requires replacing fuel tax with electronic tolling.
.
However, it is simply false to claim road freight is subsidised more than rail freight – and that shifting freight to rail through subsidies will automatically be cheaper for the country and better for the environment. Sometimes rail is cheaper and cleaner than road, usually in the cases when it is most widely used - sometimes road is. It is a not a banal contest which says "wheels on steel good, wheels on bitumen bad" - although sometimes you have to wonder if that is what drives Green thinking on transport.
.
Draw your own conclusions if you dare, from the full main report of Surface Transport Costs and Charges study.
Posted by Libertyscott at 11:25 am