The rise and fall of Jade Goody

To find out why this is the biggest news in the UK in one easy read, try Bryony Gordon's column in the Daily Telegraph, she summarises it beautifully.
^ 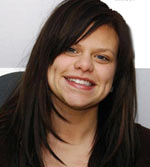 B.B - a programme for morons about morons. why don't more people use the OFF switch?

actually its a very libertarian program. people can exercise their personal right to watch it and spend their own money supporting whomsoever they like.

Viewers know it is low brow

I found your comment "The culture that celebrates and rewards talentless foul mouthed stupidity needs to be crushed." to be strangely facsist. Who should do the crushing. Why shouldnt people have the liberty to watch something mindless. Is it any worse than a fantasy story written by Terry Pratchett. It is by real people, mostly not acting. Human nature in a laboratory.

Jade Goody has made execptional use of the limited talents she has. And good on her.

Contrast it with the highly acclaimed Alan Bennetts -"The History Boys" which is nothing more than a pretentious, sometimes funny justification of paedophilia and worship of the oxbridge intellect.

I will have the reality of Big Brother over that any day.

I agree people can choose to watch and support it if they wish - hell I watched the last celebrity big brother avidly, so I can't be accused of not having a taste for this sort of thing. I completely support the right of Channel 4 to broadcast this programme or indeed any others, but that does not mean I have to agree with that or can't criticise it.

Crushing is maybe too strong a word, but I find the worshipping of the irredeemably stupid and insulting to have no value whatsoever. It reflects the same attitudes that see people unwilling to confront those who vandalise, or are loud and obnoxious on buses, or who threaten others. The idea that esteem comes from being loud and denegrating those who HAVE achieved something. It is a form of tall-poppy syndrome, except this is making tall poppies out of weeds.

I equally wouldn't use the state to stop Jade Goody making money out of being herself, or newspapers etc - but I despise the culture that makes this popular as much as I despise the likes of Brian Tamaki. It tells kids that you don't have to work, do well at school or have any talent to be wealthy - and that it is ok to sneer at those who do (which is what Jade has done).

I haven't seen "The History Boys" and have little inclination to do so anyway :)

Better than using the 'off' button, fire your TV into the trash.

I did it 5 years ago and have not regretted it. I was starting to dumb down and was disliking myself for sitting there like a cabbage and wasting my life.

I saw the stupid harpy mouthing off at a friends place, [as usual the tv going while entertaining]and marvelled at the low level of life. The elegant Indian lady in complete juxtaposition to the sad harpy, but how the hell does this make news?

This Pommie crap has been on my screen for at least 5 days in a row - TV3, Prime, TV1 etc. I know I can turn it off which is what I do and switch to J2 on Sky, but my question is who makes the programming decisions for approving this shit over New Zealand? I can understand TV1 taking it up as it's full of Pommie rubbish over the holiday period, but is there some criterion to which the others must adhere?

I don't have sympathy for Shilpa, nor does she need it. She thought it would be an opportunity, but it doesn't excuse Goody's behaviour.