The news you've all been waiting for 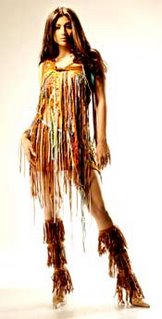 The winner of Celebrity Big Brother UK is …. Shilpa Shetty (Bollywood actress). No doubt helped enormously by the huge South Asian (and other) sympathy vote after brainless harpie Jade Goody bullied her. Shetty conducted herself with distinction, declaring that she didn’t think the comments were racist and “I really don't want to leave England putting anyone in trouble. This country has given me so much. I just want to thank all of Great Britain for giving me this fantastic opportunity to make my country proud." She had been booed somewhat as she left the Big Brother household, which was quite repulsive behaviour, but nevertheless she won UK Celebrity Big Brother, good for her.
^
Her graciousness shows what a star she is. Also notable was that the second and third place getters were also not British. Second was Jermaine Jackson, who is a Muslim (though this would not have been obvious to most) and lives in Dubai. He came across as a peacemaker and a quiet thoughtful figure. Third was Dirk Benedict ex. “Faceman” from the A Team, who was often grumpy but entertaining.
^
Perhaps most telling from all of this is that on the follow up show immediately following the opening of the Big Brother household – Celebrity Big Brother’s Big Mouth (hosted by probably the sexiest and funniest man in Britain – Russell Brand), all of the previous Big Brother contestants EXCEPT Jade Goody, her vile mother Jackiey Budden, Jo O’Meara and Danielle Lloyd (all the participants bar one in the bullying of Shilpa) did not turn up. Jo O’Meara was seriously booed when evicted two days before, whereas Danielle Lloyd somewhat redeemed herself by apologising to Shilpa and getting on very well with her after the harpie was evicted. Danielle’s boyfriend footballer Teddy Sheringham (West Ham United) apparently dumped her while she was in the Big Brother house because of her participation in the bullying. Given he is 40 and she is 23 and pretty, and Shilpa let her off for being “so young” and being rather stupid. Her prettiness and childlike demeanour may see her through, because unlike Jade she is not worth millions. Her final comment about what she learnt was “not to be such a bitch”.
^
However, Jade’s absolutely vapid boyfriend Jack Tweed did turn up, and couldn’t respond when asked whether “he had learnt a lesson in the house”, as he called Shilpa a “fucking ****” behind her back (not clear what word this actually was). Jack hasn’t heard of the word embryo (he is a dad), and only qualities are that he is a male model. Given he didn’t flee the studio to comfort Jade, he may well have activated his single neuron to figure out that Jade may hinder his career as a himbo.
^
So that circus is now over, the other circus called “Shipwrecked”, where stupid posh student Lucy Buchanan described black people as being really bad and that slavery should be reintroduced. However, you haven’t heard much of that because, you see, Buchanan is posh, she didn’t actually direct this at anyone, and she isn’t as well known as Goody. However, it reaffirms once again that claims by Channel 4 that it needs to remain state owned and indirectly subsidised are nonsense. So watch the final here, if you care.
Posted by Libertyscott at 1:34 am