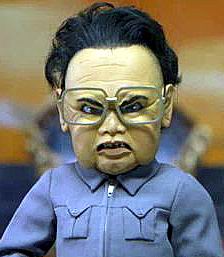 Be glad you can, for around 24 million people who live north of the Korean DMZ, they can't because they are forced to celebrate his 69th (actually 70th) birthday on February 16.  They are forced to buy "gifts" to give to senior party cadres, in order to avoid being singled out, ostracised, criticised, punished and taken to a gulag to celebrate the birthday of the Great Leader and the boundless feats he has performed for the country.   Usually birthday includes extra rations, this year it appear they are not going to happen.

Kim Jong Il is short, apparently has a speech impediment that would have made King George VI seem confident, losing his memory, is ill from various chronic illnesses due to a life of alcohol, rich food and lazy living, and absolute hates the Team America movie.   Because it makes him look ridiculous.
So does this blog, which is simply called "Kim Jong Il looking at things", and is exactly what is says, and if it came from North Korea the person producing it would get executed.

So spare a thought for the folk who have to endure a public holiday, being forced to celebrate a man who they cannot hope to express their views about, who lives a rarified existence of sumptuous luxury paid for by the virtual slave labour of the prison state inherited from his murderous, megalomaniacal, mendacious, mediocrity of a father.

You see, the main trend of the international media is to ridicule and think absurd this prison state, with far too little attention given to the atrocious way of living they endure.

First, consider this phrase from a North Korean broadcast and think how alike it seems from its unwitting intellectual companions in the West who share a hatred for capitalism:

"The youth of Eastern Europe, who were at the forefront of the destruction of socialism, were soaked in the rotten, sick culture of capitalism, and this resulted in the destruction of the fruits of the revolutionary war previous generations had accomplished...When the young became soaked in the ideology of a capitalism that knows nothing beyond money, they came to fall into a materialism that thought not of the Party and state’s benefits, not even the people’s benefits"

It takes little to see what an absolute absence of capitalism results in - mass starvation, totalitarian brutality, mass regimentation and an almost complete culture of reality evasion, suppression, denial and manufacturing.  Bear in mind this place provided inspiration for Nicolae Ceausescu and Mobutu Sese Seko.  What happens when you suppress capitalism?  It is fairly obvious.

Secondly, what gift were New Zealand taxpayers forced to give to Kim Jong Il, via Winston Peters, when the last government was the first Western country to improve relations with North Korea after the nuclear test? I'd like to know without having to visit the Kim Jong Il International Friendship Exhibition.

UPDATE: Funny how today the NZ Parliament has been debating whether students should be allowed to choose whether they belong to student unions.  No issue in New Zealand today quite so starkly exposes the hypocritical empty hatred of individual freedom, the craven self-interested desire for power and control and the mealy mouthed "wider interests, greater good" excuses the left can roll out.   It boils down to whether individuals have freedom of association.  If you can't get that, then you can't talk about human rights or anything of the like, when you think it is ok to make people belong to and pay for an organisation that they do not agree with, and for that organisation to persistently claim it somehow is representative.  It is immoral, it is fraudulent, and Kim Jong Il would approve.
Posted by Libertyscott at 5:06 am

A certain student leader recalled in a certain student mag how she had gone home to her home country and participated in orgainsing protests against the repressive goverment they have there.

Now, a funny thing happened. When it came closer to the protest, they shut her out. She thought this was to protect her, but I strongly suspect that they discovered what *she* was protesting against back home and realised that she just didn't get it.