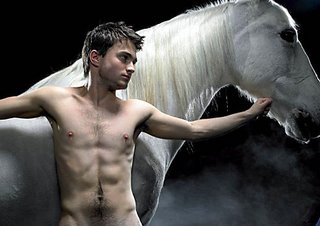 Some eye candy for the female readers who aim a bit below 20 (and the male ones too, including at least one MP, it's hardly academic who that is).
^
Daniel Radcliffe may be nude, but not Harry Potter.

Good on him, hell he's pursuing a dream of millions. Be a much loved role model and object of the affection of millions of girls, and now he's on the West End and worth a fortune at 17. The Daily Mail has the photo here (larger) to squeeze the juices from his fans. The Sun has more photos of Radcliffe almost naked (google likes these words)
^
His nudity will no doubt mean that hundreds of thousands of girls (and a few thousand boys) will be trying to get into the play, and a smaller number of pervy men (and women) will also pursue him (such is life). Hey he's 17, let him enjoy it, he clearly looks after himself and his reputation is far from tarnished. His main problem are the gold-digging tarts looking to whore their way into his substantial fortune. In the UK they are as common as rats. I presume he is having fun screening the 0.1% who will meet his esteemed standards (being hot, smart enough to not blab and not be an excessive leech, having an equally discreet hot friend so he can watch them together). I'm sure Emma Watson can advise on some suitable companions from her Oxford private school. According to Stuff some parents are apparently upset about his nudity, because their "9yo son is a fan", well don't take the boy to the play and maybe explain why you make your son self conscious about his nudity when he showers. Another asked why his parents thought it was ok to do it, well maybe at 17 being legal age and all, he can decide? Remember the average Brit loses their virginity several years before that, appearing nude on stage is a lot less risky than that! May he continue to enjoy his career, money, life and most of all be happy, and for people to get over nudity!
^ 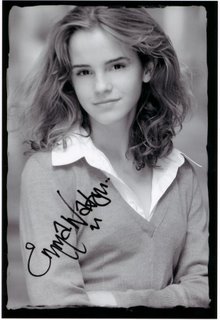 Now all that is needed is for Emma Watson to do the same (though if she does some of the press will probably be quite cruel, for women who expose are treated differently from men), as she is 17 in April (on Kim Il Sung's birthday go figure - you read it first), but she has to finish school first (don't go there). She shouldn't and wont do the "glamour model" thing, because she is smarter than that - so better to perform a serious role in a film or play that involves her being passionate and sexy. Her fluency in French should help this. So so few young female British stars can do that without simply looking cheap. She, of course, doesn't need a 45 year old sugar daddy from the City, or the money from doing doggerrell in the UK tabloid press. Don't forget Rupert Grint, he is older and may well be the most popular ginga in the UK - good on them all!
Posted by Libertyscott at 1:32 am

Its bad I know...but dear God he does look hot!

she is 17 in April (on Kim Il Sung's birthday go figure - you read it here first),

Hands up anyone, ANYONE, else in the Kiwi blogosphere who knew that.

It's not bad.... I am sure he's smarter than his age too, and yes Rick i have the mastery of the incredibly irrelevant hehe.

Very few British actresses DON'T do nudity, so it's a safe bet that we'll see Emma Watson naked one day in the not to distant future...