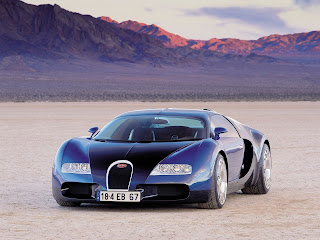 Top Gear is back, has been for three weeks. With Richard Hammond back fighting fit, the series is better than ever. This is truly one of the best series ever produced by the BBC, and ought to be on commercial television because it would make the BBC a bomb in advertising.

The first show included the video of Hammond’s accident, enough said. In fact it outrated the final of Celebrity Big Brother, showing that there is still reason to have faith in Britain (imagine the single TV households with teenagers fighting with dad about what to watch).

Since then there has been the Bugatti Veyron taken to its limits on a track in Germany by James May – the perfect car for bullying the average anally retentive ecologist, and at £800k the perfect car for one of the 4000 or so city traders who earned their £1 million bonuses. Finally, last night Clarkson, May and Hammond did a road trip from Miami to New Orleans, which was a hilarious hour watching them face challenges – the most threatening being to paint each others clapped out American vehicle in the most provocative way for driving through Alabama.

Clarkson’s car said “Country Western is rubbish and I hate Nascar”. May’s said “Hilary for President and I’m bi” and Hammond’s said “Man Love Rules”. The three of them, plus the camera man were being chased by a service station owners’ “boys” who threw rocks and wanted the queers to be run out of town. Don’t mess with redneck inbred troglodyte Americans!.

Needless to say, the show is absolutely brilliant, a breath of fresh air and fumes, of good humour, a sense of life and adventure and fun. Now who would you rather spend an evening with, naysayer humourless do-gooders or this lot?

Secondly, David Cameron actually has become more interesting. It has been hilarious seeing the newspapers and television get hysterical about revelations he smoked cannabis at 15 at Eton – when his colleagues and even politicians from other parties have been doing a “so what?”. What absolute wankers the media are? You could hardly find an industry more filled with drug takers than the media – no doubt some were hoping it would be a huge national scandal. Thank the British public for being sensible on this.

Cameron also has made some sensible statements about citizenship and immigrants signing up to the values of British society. He said that Muslim extremists are a mirror image of the pro-white supremacist British National Party. Good! He said “Those who seek a sharia state, or special treatment and a separate law for British Muslims are, in many ways, the mirror image of the BNP.” Indeed, and if you come to Britain wanting to turn it into an Islamic state expect a robust rebuttal of it. The right to free speech does not include a right to not be offended.

Finally, Northern Ireland Secretary Peter Hain is calling on those earning huge city bonuses to hand them over to those who didn’t earn it. He said two-thirds should be compulsorily paid to charity – which is code for tax surely. City bonuses are already taxed of course, but more importantly they reflect London as the leading financial centre of the world – attracting the best and brightest to work extraordinary hours for pay which is almost unrivalled outside personal entrepreneurship or the entertainment industry.

Simple point Mr Hain – the people earning it already benefit London by spending much of it on goods and services here, many already contribute to charities by their own choice, and frankly without London being such a financial centre it, and the UK would be far far worse off than it is at present. Mr Hain, you live off of other people’s compulsorily confiscated income – fuck off and get a real job before you start telling others what to do with theirs!
Posted by Libertyscott at 1:00 am

Email ThisBlogThis!Share to TwitterShare to FacebookShare to Pinterest
Labels: Conservatives

While I was amused by the American road trip segment I'm worried Top Gear is starting to show a little PCitis? After all, mocking southern rednecks is pretty much the norm in EUroland and hardly a novel concept. Here's an idea - how about driving around the suburbs of Paris with "Mohammed was an Illiterate Paedophile" written on the car? I'm sure the reaction would be a real riot (in both senses of the word)!

Top Gear is the best car show in Britain and is currently presented by Jeremy Clarkson, Richard Hammond and James May, with special appearances from the tame racing driver