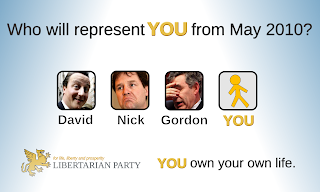 Indeed, but the Libertarian Party UK is young, and needs to grow and mature.

The manifesto was published a couple of days ago, but at least it has been done.

It's not perfect, I for one cannot argue for armed neutrality whilst being a member of NATO. It is quite contradictory. Membership of NATO means an attack on a NATO member is an attack on you. Planning shouldn't be a policy, and it should be about private property rights, and the transport policy is too complicated.

but it IS better than the one I read a few months ago. Albeit a bit too long. Still, light years ahead of the others, and something to build upon further.

Given the appalling state of the competition, it is hard to criticise at this stage, but the UK electoral cycle is up to five years. Enough time to really provide a platform for disenchanted small government liberal Conservatives (who aren't obsessed with the EU) to escape to perhaps?
Posted by Libertyscott at 2:54 am