What is it going to take to stop tolerating Mugabe? 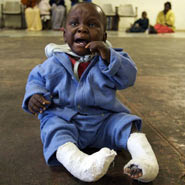 I write this post with rage, rage against Mugabe, the Zanu-PF murderous savages, rage against Thabo Mbeki the cheering lying handmaiden of Mugabe, rage against many of the fellow African "leaders" who care more for the wealth, privilege, status and power of their corrupt regimes than Africans, rage against the liberal left who fawned over Robert Mugabe, ignoring how his great heroes treated civilians in Matabeleland in the early 1980s. You see Mugabe's evil is far from new, but the spineless guilt over British racist colonialism from past generations infected the intelligentsia and the body politic with a wilful blindness at the time. Sadly Margaret Thatcher inherited a process that had gone too far to resist without inciting further civil war, and so Mugabe was handed Zimbabwe on a plate - for him and his savage comrades to slice up and swallow piece by piece.

So why am I angry? Look at the photo of Blessing Mabhena - he is 11 months old. This photo of him is on the front page of the Sunday Times. This is part of the account of what happened:

"There was a tremendous hammering on the door of her home. Realising that President Robert Mugabe’s thugs were hunting for her, Agnes Mabhena, the wife of an opposition councillor, quickly hid under the bed. It was too late for her to grab Blessing, her 11-month-old baby, who was crying on top of it.

“She’s gone out. Let’s kill the baby,” she heard a member of the gang say. The next thing she saw from under the bed was Blessing’s tiny body hitting the concrete floor with a force that shattered his tiny legs."

When all was quiet, she slipped out of the house with the baby to seek help in Harare. The 12-mile walk to Harvest House, the headquarters of the opposition Movement for Democratic Change (MDC), took most of the night. The building was awash with fleeing victims of the terror. But in the chaos there was nobody to get her to hospital. With a relative’s help, she eventually reached the Parirenyatwa hospital, where Blessing, so named because she and her husband thought he was a gift from God, was x-rayed.

These are the types of people Thabo Mbeki shakes the hands of, the people that the South African government tries to stop the UN Security Council from condemning, the people Nelson Mandela only says "are a tragic failure of leadership", the people that Barclays Bank provides offshore banking services for.

So what would it take to bring Mugabe down? It's quite simple. South Africa could turn off the fuel and electricity, it could impose sanctions on the Zanu-PF leadership and Mugabe's Cabinet and their relatives. It could lead a call that it will not recognise Mugabe's leadership and boycott attendance at the African Union summit if he goes. It could render him persona non grata and demand that a free and fair election be held, with peacekeeping forces sent in to ensure political rallies and voting is not subject to violence. It wouldn't take much.

Or it could do a Tanzania and simply invade, overthrow Zanu PF and hold elections itself, and hand power over. Zimbabwe's military would collapse if any serious effort was made to confront it. You see the ANC was far from opposed to foreign military involvement in the affairs of African countries when it was getting generous Soviet help. However, let's face it, if it is hard enough to get South Africa to condemn a murderous dictatorship, it wont confront it militarily.
The Sunday Times reports how in 2000 Mbeki openly said that Anglo-American imperialism was trying to overthrow Mugabe. That says a lot, a lot about what a Marxist thug Mbeki really is. He lied about "quiet diplomacy" which was really about him meeting his old mate Mugabe and then meeting the Tsvangarai to just say it will all be ok - it's like having your abuser's best friend mediate in your relationship. However, he isn't the only one. Namibia's foreign Minister reportedly said reports of violence in Zimbabwe during the elections are "unverified rumours".

However Botswanan President Ian Khama has reportedly reprimanded the Zimbabwean Ambassador (Botswana is one of the best governed countries in Africa), Zambian President Levy Mwanawasa has criticised Mbeki's attempts at mediation and condemned the violence. Mugabe needs to be further isolated if there is to be any hope.

So as Zimbabwe's Electoral Commission claims Mugabe has an unassailable lead in the election, Deutsche Welle reports Bush calling for an arms embargo and travel ban on officials, whilst China's official Xinhua news agency reports the result as if it were normal, constitutional and legitimate, ending the report with the statement that there were hundreds of election monitors.

Nice one China, yep the Olympics are being held by a regime with great moral credentials.

So what's the bet that Mugabe will go to Sharm el Shaikh for the African Union summit, the same organisation that whitewashes what goes on in Zimbabwe. VOA has reported the G8 may not consider the regime legitimate.

Of course the best outcome would be to take Mugabe's own advice. He says only God can remove him from office, it is long overdue to try to at least accelerate the chance of a direct encounter - whoever can accomplish this will be one remarkable hero.
Posted by Libertyscott at 3:08 am

Why should the ANC goverment want to stop these thugs whilst they are aiding and abetting their own thugs in the genocide of Boers. With close on 3000 farmers and their wives murdered, some of them having been tortured first, there has been no comment from the government let alone the Western press. This is about six times the number of blacks killed by the security forces under the tyranical 'apartheid' Nationalist government trying to quell the 'armed struggle'.

mawm,
Mugabe is an all-time disaster, and the South African government isn't the greatest in the world.

Do you wanna do that, please?

I came over here to share a poem concerning The Matyaka family in Zimbabwe: For Charity and Francis Matyaka

But that doesn't make apartheid good. You must get over the idea that "white" governments, no matter how awful, are better than "black" governments

A very sad poem, and a recurring theme in Africa.

I never supported apartheid or the National Party Government. In fact I actively opposed both. I had so much hope when the ANC took over, and enjoyed the honeymoon years.

However they have since shown themselves to be a bunch of corrupt kleptocrats that are no less rascist than the National Party Government were.

And Black governments through out Africa have been just the same. They have been tyrants feeding off the carcases of their citizens whilst enveloping themselves and their friends in cacoons of phenomenal excess and unimaginable wealth and they have been allowed to get away with it.

So I will expose them and hopefully shame then and ask the world (especially our Western leftwing press who cannot find fault with these 'vile Marxist' governments) to shun them - just in the hope that they will realise that they have to change and be representatives of all their peoples.