So where IS rail viable? Now despite all the doom and gloom about the rail network, the truth is that SOME of it is commercially viable. To show this I wanted to link to a map of the network on Ontrack's website - Ontrack being the state owned enterprise responsible for the railway network, but it doesn't have one.

Wikipedia does though here >>>>

Now of that network, you can split rail into five main businesses: Coal, logs/wood products, containers, milk and commuter passenger rail. The long distance passenger rail services by themselves could never sustain any of the lines. There is other freight, but it also is of a far smaller scale than any of the others, worthwhile on a marginal basis but not on its own in most cases.
Coal is predominantly West Coast to Lyttelton, but also some from Southland to Timaru and within Waikato (Rotowaro to Mission Bush). The West Coast line is viable for coal and that's it. The other services rely on other freight to bear the cost of the lines.

Logs/timber traffic is carried predominantly Murupara-Kawerau-Mt Maunganui or Auckland. Also Kinleith to Auckland/Mt Maunganui. There is some activity in Northland and Wairarapa to Wellington. However, it is the Bay of Plenty timber traffic that matters. Despite popular misconceptions, logs are not important freight on the Gisborne line (nothing really is, despite some forecasts in recent years). There is certainly insufficient log traffic for any of the Northland lines to be viable, with only the Murupara-Kawerau-Mt Maunganui/Auckland, and Kinleith lines really retaining enough traffic to be viable.

Container traffic is essentially movements between main centres and ports. The viable routes here are the North Island Main Trunk line, and the main southern line from Picton to Christchurch/Lyttelton and down to Dunedin/Bluff, with worthwhile flows between Waikato and Mt Maunganui. Beyond that, there really isn't enough freight to Taranaki or Napier to sustain those lines for this traffic.

Milk traffic forms the last major freight traffic on the lines. These movements are mainly southern Hawke's Bay - Manawatu - South Taranaki, Southland-South Canterbury. Again, these largely use routes carrying other freight, but do help sustain them.
As far as commuter rail is concerned, in Wellington it has a future, although the Johnsonville and Melling lines are not at all viable, money is being poured into it all so is really a sunk cost. In Auckland it is a major waste of money, but again partly a sunk cost.

So what is left? Well surprisingly quite a lot of the network is probably commercially viable, but frankly there are quite a lot of lines that have no economically viable future, unless some major freight customer wants them:
- All lines north of Waitakere in Auckland (expensive to maintain, low capacity)
- Rotorua and Taneatua branches (simply no viable freight)
- Napier-Gisborne (with big questions to be asked about Napier south to Oringi).
- All lines in Taranaki except south of Hawera (some expensive to maintain)
- Masterton to Woodville (mainly useful as a diversion for the main trunk line!)

The reason others are worthwhile comes down to either a single major customer, or having enough general freight. The latter is really just the north-south main trunks in both islands. Now if the government could only swallow those closures (or simply opening lines Toll doesn't want to operate to others if they wish), then there might be a viable railway for the trunks and the few bulk commodities that rail can handle well.
What does THAT network look like? Well this 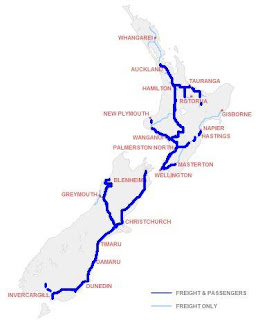 Not so bad really, with dotted lines where lines probably should close in the next few years (Napier, Southland and New Plymouth). Beyond that if Solid Energy, Fonterra and the forestry sector want rail, they should buy it - since all of the lines outside the main trunk are almost entirely about them. There is no reasons for the state to subsidise their freight movements.
Certainly the track is not worth the nonsense "replacement value" capital worth on the Crown's books of NZ$10.648 billion as listed in Ontrack's annual report. Now this DOES include some prime real estate, like Wellington railway station. That is where there certainly is some value, but $5.4 billion book value for railway infrastructure is simple accounting sorcery. No one would pay that for it, not in scrap and certainly not to charge someone to use it. If the government offered it for sale, that is not what it would go for, nothing close. The $4.9 billion for the land is similarly so, given that most of the land is a sliver of a corridor.

Oh yes I did forget one thing, the ferries. They ARE worth a good bit of money - the only consistently profitable part of the railway system for decades.
Posted by Libertyscott at 9:39 am

The NIMT is not dependent on container traffic but rather general freight, much of it to Chch and the rest of the SI.

The main traffic on the Gisborne line is fertilizer, with a bit of timber and other freight. There are currently no logs, however at some point there will be large amounts of logs coming out of the region. If this was all to go on the roads this would be a disaster, if you know the state of the road.

The Taneatua and Rotorua lines are currently closed and have been for
over 5 years.
The Ohai lines future depends upon coal to various plants throughout the lower SI. If this stops the line will go.

Milk is the major traffic on the Marton to Hawera line, but the is little movement outside of the lower NI outside of plant breakdowns. There is none in the SI at all.

The Northland line is the most at risk without any serious investment. It carries a few containers, and amounts of logs and timber but not a lot else. It is another line where large amounts of logs would place an unacceptable strain on the regions roads, and rail could really help here.

Useful comment, thanks Luke. I wouldn't say that the freight you say going on roads would be a "disaster". Petroleum has done so, and quite a few significant centres (Nelson, Kaitaia, Taupo, Rotorua) have no rail freight and "disaster" is hardly a fit description.

Do you think a subway/underground in Akld would be viable if kept to the areas where population is most densely concentrated and well paid?

I'm thinking of one line running along Ponsonby Road, across Newton Gully and down Khyber Pass to Newmarket. Also, you could run a line up and down the city (either side of Queen St) if you started it low enough under Newton Road so the gradient wasn't too steep and you went under spaghetti Junction.

What say you savage?

In terms of what you suggest would be the rail network, I don't have much of an issue with it. The most important thing, however, when closing these lines is to ensure that the corridor remains in the event that rail services can become viable again (the best example where this was not followed was in Queensland. The South Coast Line was closed beyond Beenleigh in 1964 and the land sold. Thirty years later, the government had to spend hundreds of millions on buying a new corridor for the Gold Coast Line, a line that has been more successful than anyone thought, I might add).

However, I do think that some lines need to be reconsidered

The Stratford-Ohakukura Line should be left open to act as an alternative to the NIMT. Similarly with Woodville to Masterton. Basic maintenance should suffice though

The North Auckland Line should be kept open as far as Helensville. A test passenger service is going to be operated there this year and if it is viable, it will become permanent. Given population growth in that area, further suburban services will be needed there in the next decade or two. Further to that, the Marsden Point proposal would almost certainly increase freight traffic on the North Auckland Line.

The Napier and New Plymouth Lines, as already said do carry a significant amount of freight, and with the Kai Iwi deviation under construction, I believe that New Plymouth may get more traffic in the years to come.

In terms of commuter services, I would dispute your assertion that Johnsonville is not viable. It presently carries two million passengers per annum, and would carry more if it were not for capacity issues. Melling may still have a use if the old line through to Upper Hutt was reconstructed and used for the Wairarapa runs and Upper Hutt Expresses.

No. It would cost a couple of billion, you could never recover the cost from fares or the economic benefits of any reduction in car usage. 6% of Auckland commuters start or finish their journeys in the CBD. A multi billion dollar rail tunnel to service just them would not address congestion. Remember most people using rail in Auckland were simply former bus users.

John-ston: The question is who pays to keep lines open that are not viable.

The Johnsonville line for most of the day carries less than a single bus load each way. I believe it carries less people than the Karori Park or the Island Bay bus routes. That isn't a viable rail corridor. It isn't helped that direct buses from Johnsonville using Ngauranga Gorge can be faster than trains, even taking into account congestion.

Our railway is a mess,surely we should be proud that New Zealand pioneered the first 4-6-2 Pacific and the 4-8-2 Mountain but from what I can see that the Government should join the East Coast Main Trunk line at Taneatua to Gisborne

I would not suggest closing the Masterton - Woodville section of the Wairarapa line, two reasons. First it is an important backup route that has saved the day many times, for example last october:

"A stretch of the North Island's main trunk line is expected to reopen today after a train derailment....... In the meantime, KiwiRail would be able to move freight through the Manawatu Gorge and through Wairarapa."

Secondly and probably something you're more likely to care about; more money:

"A fleet of railway milk tankers running milk from Waingawa to Hawera via the Manawatu Gorge could be the saviour of the threatened Masterton-Woodville rail link."

It would be utterly stupid at this point to suggest closing it.

Latest anonymous: On your first point, you are only right if all trains running on the trunk can cover the fixed costs of having the Masterton-Woodville line. I doubt if they can. It may or may not be an expensive insurance scheme.

Second point is fine, as long as it materialises, and of course the obvious question is couldn't they run to Wellington and then to Hawera?

I just want robust analysis done and would love it if that line could be a profitable contribution to the network.