What foreigners can do to an airport 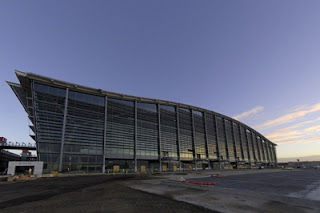 Many people flying to and from London's Heathrow Airport are about to find out. In July 2006, Grupo Ferrovial - a Spanish company - bought BAA plc. BAA plc owns Heathrow. Yes I know, foreigners. Think of the risks!

Now the approval and plans for Terminal 5 were made in 2001, but now Terminal 5 is about to open, on time and under budget. The first passengers will use it on 27 March 2008. British Airways is transferring almost all of its flights there from Terminals 1 and 4, which will provide much capacity at both those terminals to reduce overcrowding across the airport (Terminal 1 is destined to become the Star Alliance terminal, Terminal 4 for the Skyteam alliance and most airlines not belonging to any alliance).

Now Heathrow is far too often a nightmare - largely because of gross underinvestment over many years and a lack of capacity. Terminal 5 promises to transform the experience for British Airways customers, as well as allowing for the terminals it vacates to have ample spare capacity which will be used by reshuffling the airlines broadly into a terminal for each airline alliance.

See The Times for a photo series of the opening of Terminal 5 by the Queen.

Posted by Libertyscott at 12:44 pm

The opening of Terminal 5 is a tragedy for the people who live in the vicinity of Heathrow, now having to suffer further environmental loss, noise and pollution. It is also a tragedy for the wider environment, as the continued mindless expansion of aviation chews-up ever more valuable resources. The ability of T5 to "transform the experience for British Airways customers" comes at great cost for the benefit of very few.

Except of course those who work there. Those who choose to live near an airport pay comparatively low rental/land prices compared with those who pay to NOT live there. That's a personal choice factored into those prices.

The environmental cost is a nonsense as Terminal 5 does not allow Heathrow to process more aircraft - it simply spreads existing users from cramped overcrowded terminals into a facility of 21st century standards.

Meanwhile while so many bemoan how appalling infrastructure is in the UK, the small minded attempt to stop it ever getting better, whilst in Paris, Frankfurt, Dubai, Beijing, Singapore, Hong Kong etc etc airports expand as is seen to be necessary. No Britain must carry the global burden of the environment, watching its economy relatively stagnate whilst the world gets on with doing business.

Besides, 30 million people a year is hardly very few - in fact it pretty much dwarfs those who oppose.

We paid for it, so we can do whatever we want with it. Otherwise you should have asked any British company to buy such a disaster company. We are just fixing it.