Pay for our pensions, but don't expect to afford your own

That's the fundamental cry of the public sector unions which are going on strike today in the UK.  Around 2 million are going on strike, which most attention given to border control staff who by going on industrial action will see massive queues at airports as people arrive from international flights.

The people going on strike are opposing having the age at which they receive their employer (read state, read taxpayer funded) pension increased to match the actual age at which people get the state pension, they are opposing having to contribute more and opposing a shift from final salary pensions (you know, the type you could only dream of in the private sector) to average wage pensions.

I like Old Holborn's proposed message to the strikers seen below: 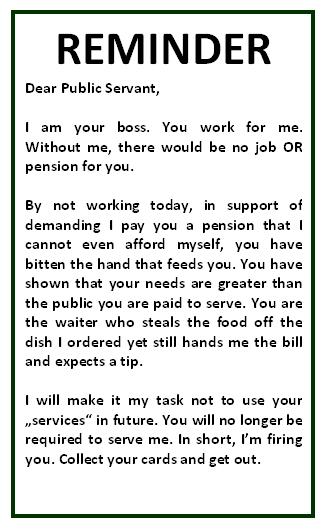 People whose incomes and employment are dependent on the private sector generating wealth, hiring employees and paying taxes to pay for them, are wanting these same people to continue to carry the burden of paying the ungrateful sods pensions that none of the rest of us could ever dream of.   Yes, some are upset that they perform useful jobs (in schools and hospitals) and were "promised" final salary pensions when given them by previous governments.  Well here's the news, government promises are worthless - they are promising to spend money that isn't theirs, that they don't have and to pass on the bill to someone else and blame them when they can't deliver (let's call that the Labour Party).   Make your own plans for retirement, don't trust politicians to make them for you.

Sadly it was the unions' lackeys in power - the Labour Party - that sold their members this unaffordable, unfunded pup, that they relied upon for their careers, and now face losing because it can't be afforded.

So the anger from the strikers shouldn't be directed at the government, it should be directed at their unions and the Labour Party - they were promised something that couldn't be delivered or afforded, and which demanded taxpayers pay for something they themselves could never get.
The enormous lie perpetuated by the unions is to pretend the UK didn't have a budget deficit or substantial public debt before the financial crisis - it did.  The unions pretend the spending cuts are to "pay for the banks".  They are not, they are to get current spending balanced, and the banks haven't been funded by the state since Gordon Brown bailed out three of them only, two years ago.  Bank bailouts aren't happening every year.

The public finances in the UK are dire.  The UK's public debt is set to reach 94% of GDP in 2014-15, worse than Germany, France or the Eurozone average, only being better than Italy and Greece - no great achievement.  Public debt is set to increase by a total of £520 billion in the life of this government.   Debt isn't being cut, the growth of it is being slowed.  The total extent of government spending cuts in the life of the Conservative/Liberal Democrat coalition will only be 3.4% in real terms (after inflation) between 2010 and 2015.  Another 1.9% of cuts are forecast for the two subsequent years.  Hardly brutal, hardly radical.  Only then will be UK budget actually be in balance.
Those striking are following the propaganda of those who want government to borrow more and more, and hope they aren't around when Britain has a sovereign debt crisis ala Greece or Italy, either that or they want to tax the "rich", which presumes they'll hang around for the privilege.   I doubt most would, and they would take their businesses and the jobs with them.

If the private sector said "sod it" and went on strike, and stopped working, stopped running businesses and stopped paying taxes, then this lot would truly be stuffed.  That's why the government should sit quietly, make sure people know that to give them what they want, there would have to be more borrowing (raising interest rates), more taxes or less spending elsewhere.  The unions don't say what option they want - let's call them out on this, and say no.

Posted by Libertyscott at 11:40 pm