Blair's days start to be numbered? 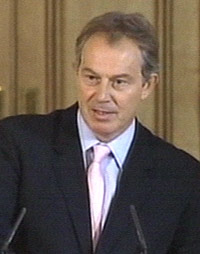 I’ve already stated before on this blog why I, on balance, like Tony Blair. This was only enhanced by the release of his education white paper, which essentially called for the administration and running of state schools to be transferred to self-governing trusts. These trusts would allow the schools to be responsible for their spending, the curriculum, their property and what staff are paid.

This would be a major step forward in shifting education away from bureaucratic state control and being autonomous – maybe even private (though even New Labour could never countenance such heresy). New Conservative Party leader David Cameron has stated that he will support all of these measures to give more autonomy to schools, and so he should.

However now the left of the British Labour Party has smelt blood. The teachers’ unions oppose these moves, because it will mean they wont be able to lobby for a collective approach to pay and the last thing they want is for schools to be accountable to parents and local communities. After all they are teachers, it isn’t their fault when children fail at school, or if parents think they are poor performers – for some reason teachers’ unions believe they must be immune to the performance pay and accountability measures others have in their professions. Around 100 Labour MPs are reportedly not happy about the proposals – which could put them in jeopardy, unless the Tories back them. However if that happens, then Blair will feel like a lame duck, needing the Opposition to pass his legislation. This plays into the hands of those who want him to resign and pass the banner over the Gordon Brown sooner rather than later.

The reform agenda of the Blair government appears to be waning. The Daily Telegraph (leftwing wits call it the Torygraph) claims Blair is a lameduck PM, which is going a bit far - but it looks like the Labour Party left is starting to come out from under the rocks as it sees a time to get Gordon Brown into number 10. At that point it would have four or so years of stalling reform, moving policy to the left, with the intention of getting a mandate for it at the next UK election which is unlikely to be before 2009 (there was one earlier this year after all!).

It may well be that as Blair loses his ability to implement reforms of education and welfare, that the Conservative Party, revitalised with a young and vibrant leader in David Cameron is in the ascendancy.
Posted by Libertyscott at 11:23 am