WTO agreement tentative - no thanks to France 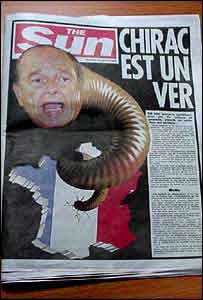 Jacque Chirac is a worm - and the WTO talks have essentially confirmed that.
A deal is imminent at the WTO talks in Hong Kong, but the South Korean farmers (who can afford to fly en masse to Hong Kong, but afraid to compete with rice produced in Thailand) shouldn't fear - Jacque Chirac has saved their bacon, and helped maintain distorted trade in agriculture, with a tiny concession for 2013. In doing that, farmers in Thailand, Bolivia, New Zealand, South Africa, Pakistan, Indonesia, Australia and many other countries have little reason to be grateful.

The European Union looks likely to concede a 2013 threshold for abolishing agricultural export subsidies (but nothing on import quotas, tariffs or domestic subsidies), even though the US was pleading for 2010 and the Cairn’s Group (including New Zealand) were pushing for earlier removal of export subsidies and progress on other restrictions. Export subsidies for cotton will go in 2006, largely affecting the US and benefiting a number of developing countries.
Least developed countries will get quota and tariff free access to developed country markets for most of their exports, not that this will help agriculture much when the EU maintains export subsidies till 2013, and domestic subsidies continue to grossly distort trade.

Developing countries have also agreed to some liberalisation in the access they give to imported manufactured goods and services, particularly telecommunications, banking and transport.

So what does this mean?

Not a lot, it is glacial progress. It wasn’t without a lot of goodwill from developing countries and the US – and of course New Zealand was at the forefront of advocating free trade.

Frankly, it means the French, by and large, have screwed efficient agricultural producers - rich and poor. Why?
Because it was the EU which refused to make further substantive progress – NOT the US (although it is touchy about domestic cotton subsidies) and not developing countries.
At the EU, there are two blocs on agricultural trade - the reformist group (the UK, Scandinavia, Netherlands) and the ostriches (French, Italians, Spanish and Austrians). The French basically said no, and were not even happy with the 2013 deadline to get rid of export subsidies for agriculture. Lets note that export subsidies consist of 2% of the total value of all agricultural subsidies. France would veto any EU offer that went further.

The USA is often painted as the great world villain exploiting the poor and holding them back, but the US had pushed hard to abolish export subsidies no later than 2010 and to make progress on domestic subsidies. The US agreeing to accept abolishing cotton export subsidies next year is a worthwhile step forward, all export subsidies should go then at least.

The Common Agricultural Policy of the European Union is fundamentally immoral – it props up the wealthiest farms in Europe with subsidies, including those owned by the Queen and Prince Charles – it inflates the price of food to European consumers, and because it is a high proportion of EU spending, costs European citizens in tax. It shuts out efficient producers like New Zealand, Thailand, Pakistan, Bolivia and South Africa from the European market. The EU uses export subsidies of around US$3 billion per annum to prop up exports of sugar, dairy products and beef.

My earlier post outlines some of the absurdities of the CAP.

It is unrealistic to expect the European Union – basically a project that unnaturally marries free trade with socialist central planning – to abolish all agricultural protection overnight. However, it should. It uses four types of protectionism to screw up world trade in agricultural products:

These should go in quick succession – by 2010. With export subsidies, which currently cost US$3 billion per annum abolished first. This would match the offer by the Bush Administration to do the same, and challenge it to follow through on its own import restrictions and agricultural subsidies – for now, Chirac the worm has told the developing countries to go fuck themselves if they want to trade on a less tilted level playing field in OTHER countries, because the French want their “right” to use their taxes to undercut them, till 2013.

However, will you see Bono or Bob Geldof going to Paris to protest against this intransigence? Will you see any of the venom directed at Bush for being, well, Bush – directed at Chirac, the French government and the European Union? I doubt it…
Posted by Libertyscott at 6:04 am